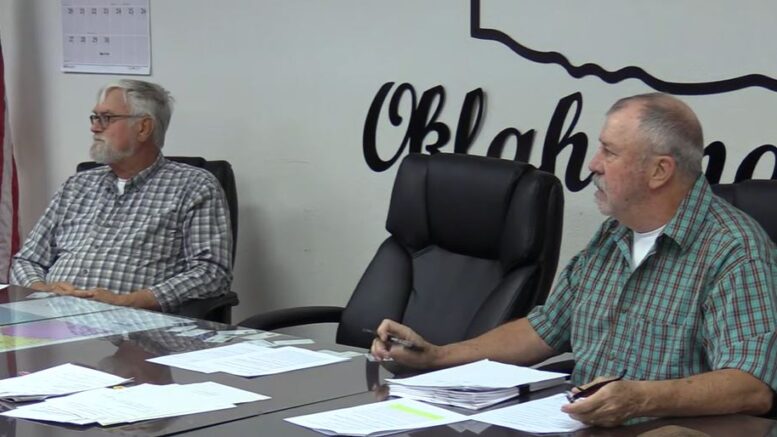 Legal counsel for the Board of County Commissioners is now considering what options are available for an expired lease purchase agreement for a road grader in District 2.

“What is the status of the 2015 (road) grader that we leased from Warren CAT? The balloon payment,” Ellis asked after being elected just six days prior to the meeting in an election win over Pearson.

Pearson said he was uncertain on the status and asked that Ellis get with him later to discuss the matter.

The BOCC approves and signs off on all county equipment, which includes lease purchases.

At Tuesday’s meeting, Goodman began the conversation by supplying a three-page document on state statures in regards to an election year, including a highlighted portion that reads:

The lease on the questioned grader is reported to have expired, in which, Pearson agreed with.

“It (grader) was over hours and it caught us unaware as well as CAT,” Pearson said. “In order to figure out what to do about that, we have inquired with the state auditor, who has now referred that to the Assistant District Attorney Lowell Barto. He is looking into that.”

“You’re legally on the hook for it. You probably should,” Goodman told Pearson.

Pearson added, “We can’t surplus it because I did not win re-election and we can not purchase it. We are currently making payments. Here’s all the information that you requested, sir,” Pearson said has he handed over a deep stack of papers.

The lease purchase agreement included a 5,000 hour max or five years. The current hours on the grader is reportedly recorded at 7,240 hours.

At the end of the contract, the County had the option of turning the grader back to CAT, or pay the balloon payment of $180,000. However, since the hours have been spent with no formal action taken, the contract is now null and voided.

On June 15, the BOCC voted (3-0) unanimously, in part, to renew the fiscal year 2020-21 lease agreement for the grader with CAT Financial.

CAT officials, who were in attendance on Tuesday, said there are a few options available, including trade the grader for a new machine with a trade assessment on the value of the current state of the grader, or pay the difference between the assessed value and what is owed.

Goodman requested the conversation be continued at the next BOCC meeting scheduled for Sept. 15 at 9 a.m.