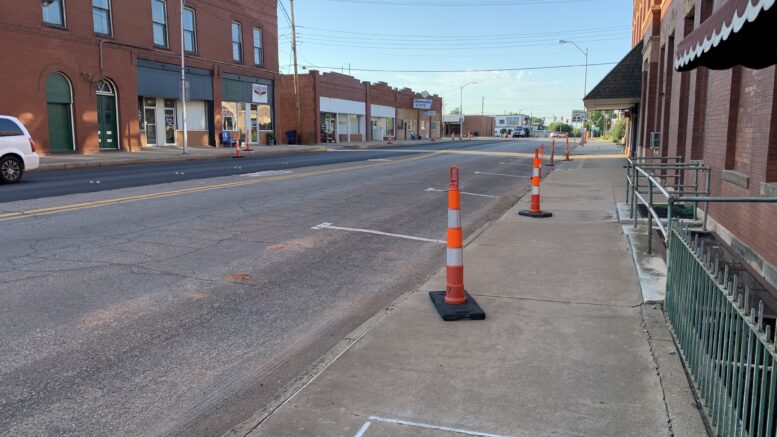 Updated on Aug. 13, 2020 — The estimated $1.2M sidewalk project that will include major portions of Division St. and Noble Ave. will move forward. However, the project will not go through the historical district of the downtown area. Related article: Sidewalk project to go on excluding downtown area

The estimated $1.2M sidewalk project along Division St. and Noble Ave. has taken a bump in the road after the Historical Preservation Commission (HPC) voted to adjust the project requirements within the historical district.

The Oklahoma Department of Transportation, who is funding the entire project, would install and improve sidewalks along Division St. beginning from Industrial Road north to Noble Ave. and from the intersection of Noble Ave. and Division St. east to Drexel St.

The proposed project runs through the historic district beginning from Perkins St. to Vilas Ave. on Division St. and from Cleveland Ave. to Noble Ave. and on Noble Ave. from Division St. to Broad St.

The improvements would include meeting American with Disabilities Act (ADA) for sidewalks, ADA ramps and limited curb and gutter replacements.

The State Historic Preservation Office (SHPO) agreed to the project. However, last week the HPC raised concerns of the appearance of the sidewalks.

Councilman James Long, who sits on the HPC as a non-voting member said, “I think if it’s going to be located in the historic district it should be brick pavers, which can be ADA compliant. Edmond downtown district has it. Or it should be stamped and stain concrete to resemble brick.”

Commissioner Erin Brown added, “I would like to see a brick aesthetic in the overall historic part even though that’s not necessarily under the jurisdiction of our committee.”

Currently in the historic district along the proposed east side of Division St., brick sidewalks are only found near Oklahoma Ave. and in front of a building entryway. A super-mass majority of the current sidewalks are non-existent or concrete.

The three separate locations where bricks are present in the historic district would remain in place.

Brown made the motion to approve the project within the historic district but requiring brick sidewalks. Commissioner Patrick Kerr second the motion and was followed by unanimous yes votes by Brown, Kerr, Joe Chappell, Adam Ropp, Valerie Duncan and Lynn Bilodeau.

Despite not being an agenda item, the commissioners requested the entire project be done with brick pavers. The motion passed unanimously (6-0).

“I’m pretty sure we are not going to get it, but we are here to do what we think is best for the City of Guthrie,” Kerr said before the all brick vote.

Bilodeau added, “It’s out of our jurisdiction. It’s just an advisory and request.”

The cost difference between a brick and concrete sidewalk is an estimated $50,000 additional for brick on one side of a city block (360 feet), according to a City engineer.

City officials notified ODOT of the HPC’s request on Aug. 4, but as of Monday afternoon have not heard back on the future plans of the project.

This report documents a cultural resources investigation for a proposed project for ADA improvements along US77 and SH-33 in Guthrie.

Presently, along US-77 / Division St. and along SH-33 / Noble Ave. in the study area, sidewalks are either absent, or not consistently in good repair. In particular, the more recently-developed southern portion of the US-77 / Division St. study area lacks sidewalks. On existing sidewalk, ADA ramps are either absent or not up to current standards. The project proposes sidewalk reconstruction / construction, ADA ramps, limited curb and gutter replacement, driveway reconstruction, reconstruction of some street returns at intersecting streets, limited retaining wall and handrail construction, crosswalk and stop bar pavement markings, and relocating existing signs. In general, the sidewalk will be five feet wide. Where the sidewalk will cross two bridge-length culverts listed below, the project proposes headwall extension, handrails, and adjacent retaining walls. Please see the attached plans for details.

The existing bridge carrying US-77 over Snake Creek which the sidewalk will be built across [ODOT Structure #4202 0376 X (NBI 07205)] is a concrete culvert constructed in 1939. This bridge is listed in Category 1 of the Programmatic Agreement for bridges constructed under Depression-era Relief Programs and was not documented as part of the undertaking. Category 1 bridges are considered not eligible for inclusion in the NRHP.

The existing bridge carrying US-77 over an unnamed creek which the sidewalk will be built across [ODOT Structure # 4202 0337 X (NBI 01479)] is a concrete culvert constructed in 1925 and reconstructed (widened) in 1979. This bridge has been documented on an Oklahoma Bridge Survey and Inventory Form for SHPO review.

To view the 21 minute discussion on the sidewalk project, you can skip to the 17 minute mark.

Be the first to comment on "Division St., Noble Ave. sidewalk project hits bump in the road"