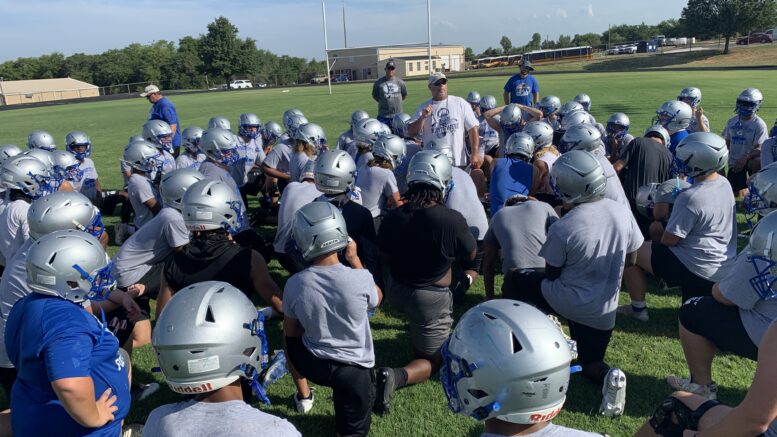 The start of the Guthrie High School football season officially got underway with the start of fall camp Monday morning. The Bluejays worked out in helmets and shorts during the morning hours, and will continue until they turn to full pads at the end of the week.

The Jays will look to build off last year’s 10-2 season that ended in the second round of the playoffs. The 10-win season was the first since 2014.

Kelly Beeby, who joined the Jays staff in 2004, is set to begin his 9th season as the head coach. The schedule will challenge his team, including a non-district showdown with 4A powerhouse Tuttle along with district games with Carl Albert, McGuinness, and Piedmont.

Beeby looks for leadership to come from a talented group of seniors, who many will be three-year starters.

The offense will be led by running back Isiah Hammons, who averaged nearly 7-yards per carry. He has shown to be a home run threat anytime he receives the ball.

In last year’s second-round playoff game in McAlester, Hammons totaled three scores and reminded everyone that he’s one of the top RB’s in the state. Although, the nearly 1,600 rushing yards and 25 scores in 2021 should have been enough to make his case.

Quarterback Hayden Calvert, who led the Jays to a first-round playoff road game his freshmen year, will look to help take some of the pressure off the running game with his right arm. Last season, he finished with 1,595 passing yards and 19 touchdowns.

Opposing defenses will have to respect the Jays passing game with Tyrin Eaton and Jalyen Chelf. Also returning is halfback Carson Wilder, who not only can block but can catch the ball.

The Jays will look for leadership along the offensive line after graduating the front five. Despite the new look, Beeby expects the line to be athletic and provide a good nucleus for the 2022 offense.

The bread and butter for Guthrie Football is the defense. This season will likely prove themselves again.

The defensive line will look different with multiple new players, but Jackson Walters, Niko Pena, and DeLoeantea Glover bring back some experience. The Jays will need to fill the void of losing Chris Shaputis, a 2021 All-State player.

The Jays lost two good 5A linebackers to graduation and will need to void the spots. Landen Hirzel and Josh Varnell are likely to fill those spots with great work ethics but will need to learn on the job.

The backfield brings back Braden Chaney and Zac Henry. The coaching staff will have the benefit to work various players out for the vacant position left by DeAndre Jones, a 2021 All-State player.

Be the first to comment on "Fall camp begins for Guthrie; expectations high for 2022"