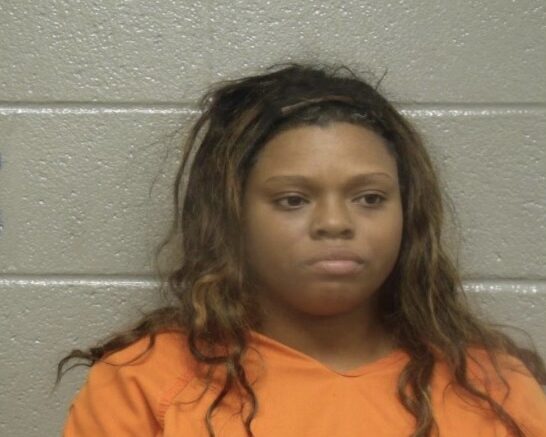 A Langston woman is facing multiple charges for theft. All the crimes were reported to have taken place at two different fast-food restaurants in town.

According to Guthrie Police, four people, in January of this year, had their credit card information stolen and soon after used for fraudulent purchases.

All four people were said to have used their credit card at Pizza Hut, located at 218 Heather Rd, at the drive through window.

Investigators were able to determine that 21-year-old Tajanai Renee Bonton was working the window on the nights of the alleged thefts.

Police learned Bonton had an outstanding Logan County warrant for embezzlement by an employee. She was taken into custody by Langston University police and transported to Guthrie for questioning.

Investigators told Bonton she was seen on video taking credit card information by taking a picture of the card with her phone. Bonton reportedly said she was on Facetime and that somebody could have gotten the credit card number. She told police she could not recall who she was talking (Facetiming) to at the time.

With permission from Bonton, investigators looked through her phone and found a picture with the back of a credit card. In the background appeared to be a Pizza Hut back room, according to police. Police informed Bonton that they believed she had taken pictures of the credit cards and used them for purchases. She shook her head yes but stated no, according to police.

With the assistance from banking intuitions, one victim reported over $800 in fraudulent charges, another victim saw $700 in charges and another victim reported $500 worth of non-authorized use of charges. Some of the purchases were found at Best Buy, Shine (online store), Walmart, Fashion Nova, Cash Star and Stadium Gear. Some of those transactions were found by police on Bonton’s phone.

Bonton was arrested for either taking photographs and/or on Facetime with an unknown person and stealing the identities and credit card numbers of customers.

In October 2021, Guthrie Police was called out to Carls Jr. (2700 E. Highway 33) in reference to a worker who was seen stealing money from the register.

The store manager told police that Bonton was conducting a cash transition where she took an undisclosed amount of cash and put into her apron pocket. The manager claimed $678 was missing from the cash door on the five nights in October that Bonton had worked.

Bonton told the officer she had taken $20 before, maybe $40, according to the police report. She added that everyone steals money, but she has never reported it to management.

She was charged with four felony counts of identity theft and a misdemeanor charge of embezzlement by an employee. She was given a $10,000 bond and a March 24 court date.

Be the first to comment on "Former fast-food employee charged, twice, for theft"