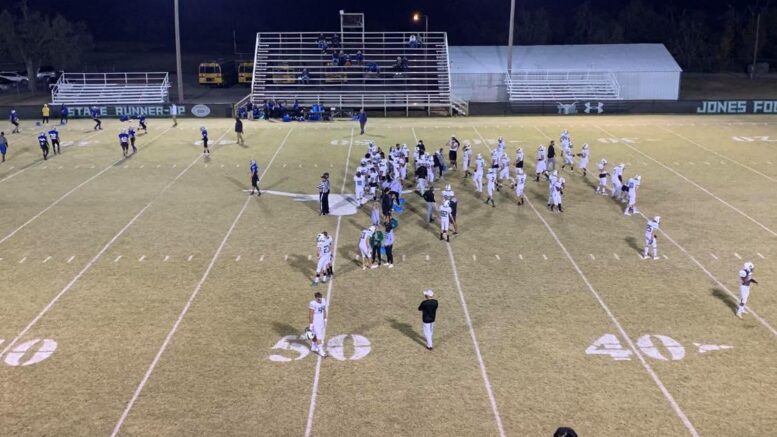 A late 36-yard touchdown pass from Carson May topped off a Jones, 32-26, win over Guthrie. Just nine hours before kick, the Bluejays did not know there was even going to be a road game.

Jones head coach Dave Martin was down to one of his last options of having a Friday night game. Due to COVID concerns, Meeker was forced to cancel their game with Jones at 9:30 a.m. on game day.

After a few denied calls to other high school programs not wanting to play the 2A Longhorns on short notice, Guthrie head coach Kelly Beeby accepted the game despite practicing all week believing they could be off the playing field for two weeks.

Without accepting the Jones offer, Guthrie would have played one game (McGuinness) in four weeks after cancellations from Lawton Ike, Western Heights and Southeast. Not a good recipe for going on the road to Lawton MacArthur for a second round playoff game on Nov. 20.

Jones, a strong Oklahoma football program, has won 67 of their last 75 games with the win over Guthrie. That’s an 89 percent winning percentage.

The Longhorns, who have Class 5A looking athletes and an offensive minded head coach, took advantage of four Guthrie turnovers and jumped out to a 20-7 second quarter lead.

Guthrie rallied for three scores in the next five minutes to take a halftime lead of 26-20, but that would be the last of the Jays scoring playe in the game.

May, a 6’5″ top 2021 Oklahoma quarterback prospect, finished with two scores on the ground and two more in the air, including the game winner with 37 seconds left in the game.

Senior Kaiden Ballard Stevenson hauled in a 49-yard scored for the Jays first points in the first quarter. Fellow senior quarterback Josh Rains had touchdown runs of 10 and 32 yards. Isiah Hammons added a 23-yard run just before the half.

Be the first to comment on "Guthrie falls to Jones on late touchdown; playoffs to begin with a bye"