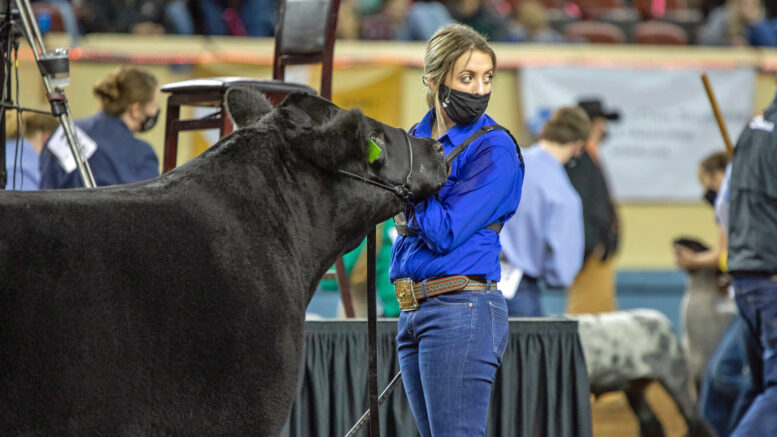 Kaia Codding's Class winning steer she qualified for the OYE Sale of Champions.

The Oklahoma Youth Expo is the world’s largest youth livestock show with over 7,000 4-H and FFA exhibitors having over 21,000 total livestock entries. This is equivalent to the state tournament of livestock shows here in Oklahoma.

Sophomore FFA member Steven Sanders exhibited the Grand Champion Barrow and brought home a trophy as well as the use of a bumper pull hog trailer for one year.

Steve’s barrow was a crossbred barrow that he purchased and raised over the course of the past year. It was selected as Division Champion then Crossbred Champion, then overall Grand Champion. This barrow also qualified for the OYE Sale of Champions.

Also several other FFA & 4-H members had much success during OYE and placing in the top half of their classes during competition.

4-H member Anna Stevens qualified for the OYE Sale of Champions with her crossbred market lamb after placing second in her class at OYE.

Senior FFA member Kaia Codding won her class with her crossbred market steer and went on to qualify for the OYE Sale of Champions as well as having the Reserve Division Limousin heifer.