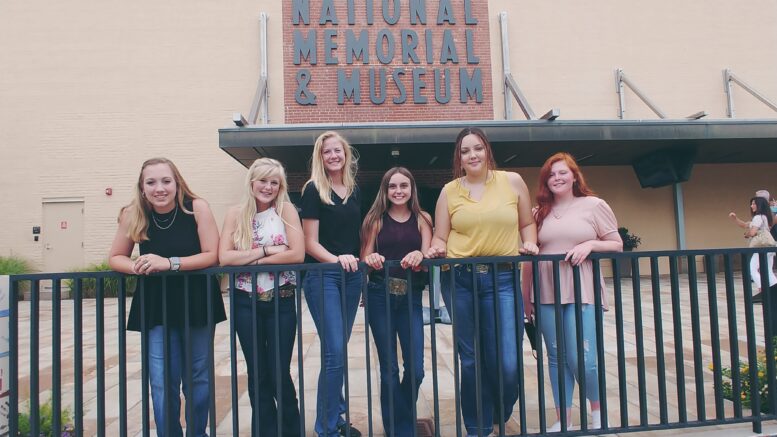 This past July the Guthrie FFA officer team and the advisors had the pleasure of spending three days for their officer retreat planning, upcoming events and activities for the chapter’s upcoming year.

On the first day they met at the Ag building for their first work session, and started creating some goals for the chapter as well as the officer team.

The team created the chapter mission statement for the year. Afterwards, they visited the Oklahoma City National Memorial & Museum to learn more about that tragic event that stuck 25 years ago.

“Not only did we learn about this event we also reflected on our lives and our world today,” FFA Advisor Clay Drake said. “It was a very humbling moment, because it shows how short and precious life really is.”

Next they traveled to the Oklahoma Stockyards and enjoyed dinner at Cattlemen’s Steakhouse and then ventured to Red Door Escape Rooms.

“The team and advisors worked together to complete the mission that was given to us. We were successful in doing so and even had time to spare. To celebrate our success we finished the night with frozen yogurt,” Drake added.

On the next, the officer team went to Edmond to get lunch had some time getting to know each other. That evening the team and advisors headed out to Ron Plagg family’s home for a cookout and swim party.

“We would also like to thank the Guthrie High School Assistant Principal Dusty Throckmorton for cooking,” Drake said.

On the final day of the retreat, the team spent the morning wrapping up the program of activities and other chapter business.

Later, they were joined by the Ryan FFA officer team and advisor for a chapter visit and lunch. During the chapter visit each officer team presented information and facts about their chapter. Following lunch officers from both chapters worked on team building and leadership from the guidance of motivational speaker Bill Cordes. After the workshop between the FAA officer teams, the retreat was concluded.

Be the first to comment on "Guthrie FFA host Officer Retreat"