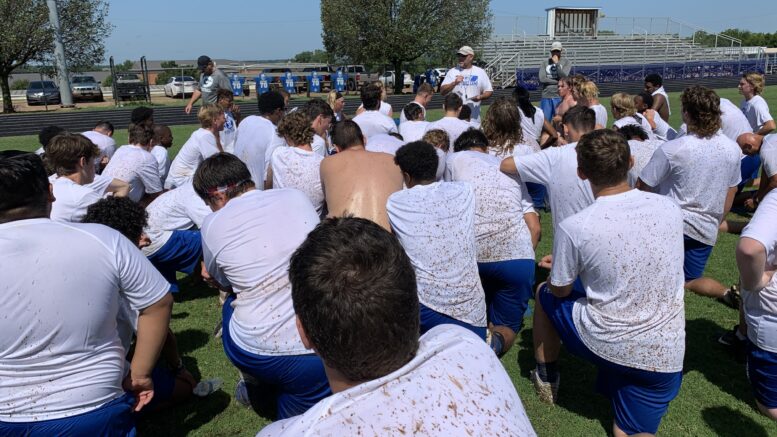 The Guthrie Bluejay football program opened their fall practices this week. While the Jays run through drills and plays, the one question continues to linger around camp. Will we get to play?

On the day the Big 10 and Pac 12 conferences postponed their football
season, the Jays were sprinting and dashing at the high school practice field
Tuesday morning as the rain came down.

“We want to play,” head coach Kelly Beeby said as he cheered on his team who was running sprints to end “a good” practice.

“We got better today.”

Beeby, who is set to begin his seventh year as the lead man and 17th overall season on the Jays sideline, says his players and parents want to see
Friday night lights.

“We are going have to play more sophomores than I would like too, but I like this class,” the ball coach said on his young but experienced team.

Guthrie, who finished 4-6 last season and missed the playoffs for the first time since 2004, will scrimmage Lawton and Bishop Kelley on Aug. 21 inside Jelsma Stadium. The freshmen will begin at 6 p.m. and will be followed by the junior varsity and varsity.

Jelsma Stadium will host the annual event Meet the Jays at 6 p.m. on Aug. 18.

The season opener is slated for Aug. 28 when the Jays host Shawnee.

Be the first to comment on "Guthrie Football underway with practices"