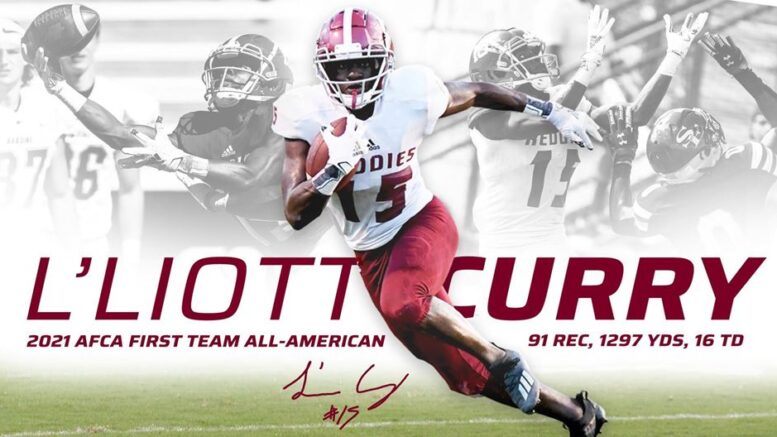 The AFCA All-American team is voted on only by sitting NCAA Division II coaches and is seen as one of the most exclusive postseason award lists a player can be named to. Curry is just the third First Team AFCA All-American in Henderson State program history, joining fellow receiver Darius Davis (2014) and punter Cody Mikell (2017).

The accolade for Curry, who was also a Second Team All-American in 2019 by D2Football.com, is the second All-America recognition of his career. He is just the seventh Reddie of the NCAA era to receive All-American honors in multiple seasons.

The pride of Guthrie was arguably the best all-around DII receiver in the country this fall and finished third nationally in five different receiving categories: receptions (91), yards (1297), touchdowns (16), yards per game (117.9) and receptions per game (8.3). In 23 career games at Henderson, Curry caught 175 passes for 2464 yards and 30 touchdowns — all of which rank second all-time at HSU.

Already a First Team All-Super Region 3 honoree and one of 36 national nominees for the Harlon Hill award, Curry still awaits potential 2021 All-America consideration from the D2CCA, Don Hansen Gazette and D2Football.com. He is seeking to become just the second consensus First Team All-American of the NCAA era at Henderson State.

For the Bluejays, Curry was a two-way star and earned Oklahoma Coaches Association All-State accolades at wide receiver as a senior after catching 50 passes for 802 yards and seven touchdowns in 2014.