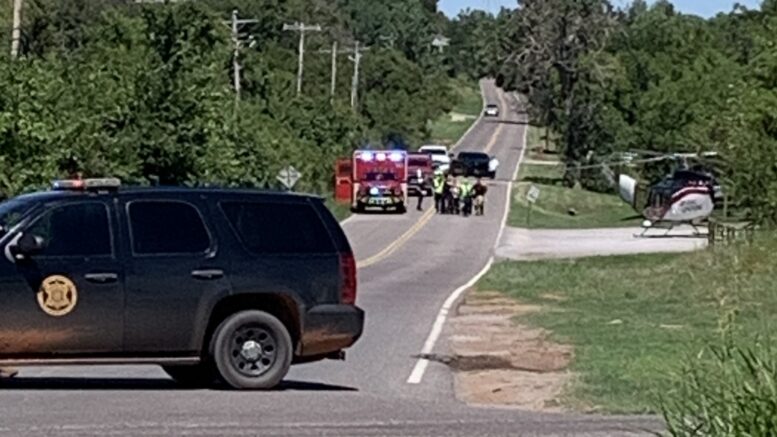 The Oklahoma Highway Patrol says a semi-truck driver was not paying attention to the roadway causing an injury accident that sent two people to the hospital on Sunday afternoon.

According to an OHP report, a 2015 Ford F-350 driven by 43-year-old Michael Story, of Luther Okla., was traveling southbound on Douglas Blvd. and a 2020 Freightliner driven by Terrence Knight, 44, of Oklahoma City, was traveling northbound.

Troopers say the Freightliner departed the roadway and overcorrected, striking the F-350.

The cause of the collision is listed as “inattention.”

Story was transported by Guthrie EMS to OU Medical Center and admitted in fair condition with neck, arm, leg, and trunk external injuries.

There were two passengers in the F-350, including 22-year-old Brandon Story, of Luther, who was mediflighted to OU Medical Center. He was admitted in critical condition with neck, trunk internal, trunk external, and leg injuries.

The other passenger, a juvenile, was not injured.

The driver of the semi was also not injured, but the passenger, 23-year-old Dorain Grisby, of OKC, was transported by Guthrie EMS and was treated and released at OU Medical Center.

The roadway was blocked for nearly four hours to traffic. It was reopened entirely at 3:50 p.m.