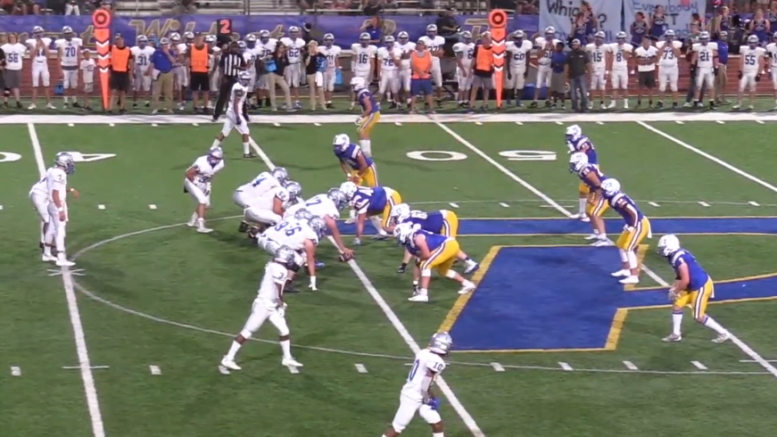 Along with timely play calling, a balanced offensive attack and stingy defense, the Guthrie Bluejays controlled the night as they opened district play with a 35-14 win in Piedmont.

Guthrie has now won 9 of the 11 meetings with Piedmont in the series that dates back to 2006.

“We were so disappointed we didn’t get the opportunity to play them a year ago,” head coach Kelly Beeby said in his post-game radio interview after last year’s game was canceled due to COVID-19. “The kids were super excited to get over here and get on the field. I thought we performed extremely well.”

Guthrie improves to 4-0 and 1-0 in the district, while Piedmont has dropped their first three games.

The Jays offense piled up 403 yards of total offense, while the Jays defense held the Wildcats flexbone offense to 129 yards (all on the ground).

The offense was stellar with sophomore quarterback Hayden Calvert finishing 7 of 11 passing for 148 yards, including touchdown tosses of 33 and 50 yards. He added another score with a 3-yard run.

In the meantime, junior running back Isaiah Hammons continued to do what he does best. Run the ball. He finished with 175 rushing yards on 21 carries with a rushing and a passing score to seal the deal for the Jays.

Hammons was named the NORTHCHURCH GUTHRIE Player of the Game.

Piedmont scored on the game’s opening drive with a 64-yard march to go up 7-0 just 2:41 into the contest.

Beeby said Piedmont showed some new wrinkles in their running game, but that his team was able to make some adjustments.

And adjust they did. The Jays defense allowed 65 more yards of offense for the remainder (45 minutes) of the game.

Hammons tied the game late in the first with an 18-yard run.

Calvert’s rushing score pushed the score up 28-7 midway through the third quarter.

Piedmont scored next by taking advantage of a Guthrie special teams’ turnover at the 11-yard line.

The Jays closed the scoring out with a little bit of trickery.

On fourth down and goal from the 6-yard line, it appeared the Jays were going to attempt to run the ball in with Hammons, but instead Hammons stop, passed and delivered a beautiful rainbow pass to Eaton in the back of the endzone.

The tough road continues in District 5A-2 for the Jays as they return back to Jelsma Stadium and entertain the five-time defending state champion Carl Albert Titans (2-2).