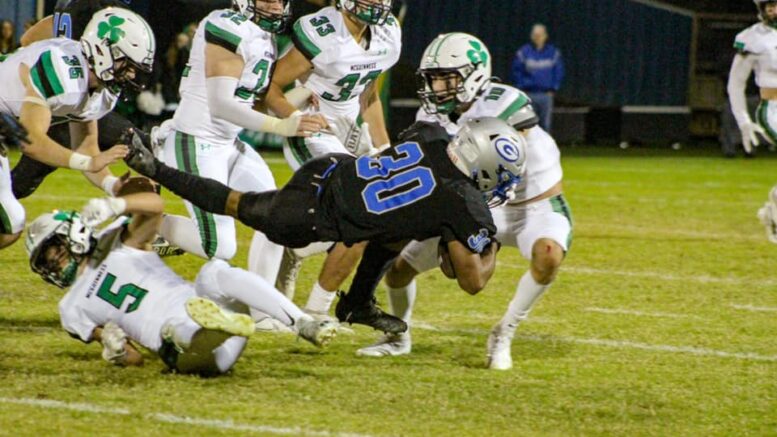 Guthrie running back Isaiah Hammons rushed for 231 yards and three scores in a 35-34 overtime win against McGuinness. Photo courtesy of Kaia Calvert.

The three-plus hour high school football game between Guthrie and McGuinness came down to one play. After the final play of the game, the roar of the crowd bounced off the 30-foot sandstone wall and reminded everyone how special games can be inside Jelsma Stadium.

In overtime, Bishop McGuinness stand-out Michael Taffe needed three yards and two points to send the Bluejays on the road for the first round of the playoffs. However, Taffe had no where to go and was denied giving Guthrie a thrilling, come-from-behind, 35-34, win.

The overtime period did not see possible with the Irish leading 28-13 with less than six minutes left in the game, but two touchdowns and a two-point try in less than five minutes sent the game into the extra period.

Sophomore quarterback Hayden Calvert scored on an 8-yard run, and with the extra point, the Irish needed a score.

McGuinness scored on their first play with a 10-yard touchdown pass from River Warren to Paul Tarman. As they had done all night, the Irish went for two points and the win. Warren handed the ball to Taffe and the Guthrie defense stopped him behind the line of scrimmage for the win.

Calvert supplied the first score with a 2-yard score to pull the Jays within eight, 28-20.

Without a field goal kicker, McGuinness was unable to convert a fourth down and six play from the Jays 16-yard line and turned it over on downs with 4:15 left in the game. However, Guthrie was forced to punt with 3:27 left.

The Irish appeared to have sealed the win with a Taffe reception, but a holding penalty neglected the first down. The Irish later was forced to punt giving the Jays the ball back at their own 39-yard line.

On the first play, Calvert found junior Jaylen Chelf for a 44-yard pass completion. On the next play, Hammons scored on a 17-yard run with 1:16 left. However, a two-point try was needed to tie the game.

And Guthrie did not hesitate with their play call.

Calvert took the snap, tossed it to Hammons, who then tossed it to junior wide receiver Ty Eaton who stopped and threw back to a wide open Chelf to tie the game, 28-all.

On the next possession, McGuinness went three-and-out and punted to give the Jays the ball at their own 43-yard line with 52 seconds.

On the drive, Eaton was clutch with catches of 12 and 13 yards and a 13-yard pass completion to setup a game winning 25-yard field goal. The kick just missed going through and sending the game into overtime.

With the win, Guthrie (8-1) will host a first round playoff game for the first time since 2014.

— Hammons was stellar with three touchdowns and finished with 231 rushing yards on 36 carries.

— The win was the first overtime game for the Bluejays since 2018 when they beat Duncan in a first round playoff game.

— Guthrie had lost their previous six meetings with the Irish

Be the first to comment on "Jelsma Stadium Magic; Guthrie wins in overtime"