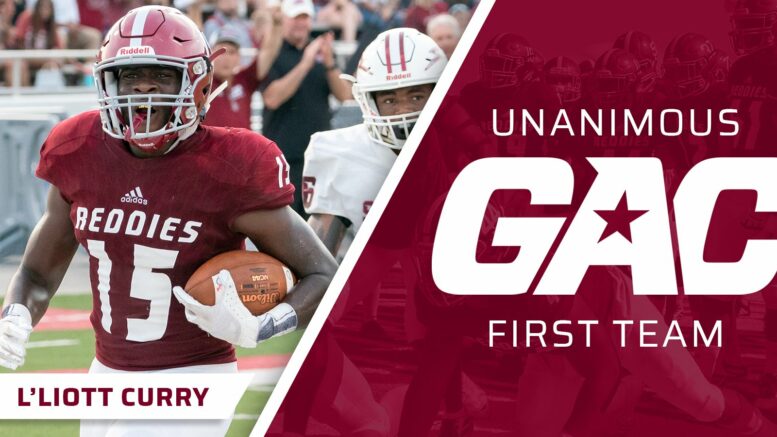 Curry was one of 12 Reddies to receive the honor.

Curry is one of the 36 college athletes from across the country nominated for the Harlon Hill Award, which is given to Division II’s football Player of the Year.

The 36 initial candidates will be placed on regional ballots and the top two players from each of the four NCAA regions will advance to the national ballot when regional voting concludes on Monday.

The winner of the 2019 award will be announced on Friday, Dec. 20 and the winner will be honored at the Little Rock Touchdown Club awards banquet on Jan.9, 2020.

Curry received the All GAC unanimous support after he finished the regular season ranked in the top 11 nationally in catches, yards and receiving touchdowns.

Curry transferred to Henderson after spending three seasons at Central Oklahoma. He played in 26 career games for the Bronchos and made 56 receptions for 963 yards and 10 touchdowns.

During his sophomore season, Curry started all 12 games and caught 32 passes for 600 yards and six touchdowns.

For the Bluejays, Curry was a two-way star and earned Oklahoma Coaches Association All-State accolades at wide receiver as a senior after catching 50 passes for 802 yards and seven touchdowns.

Be the first to comment on "L’liott Curry an unanimous All-GAC selection; nominated for national award"