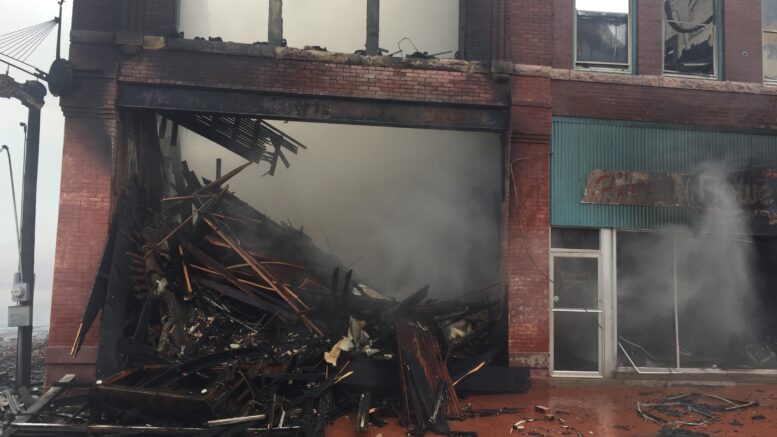 A second lawsuit has been filed in Logan County against a flower shop business and a man following the 2019 downtown fire that destroyed two downtown buildings.

Farmers Alliance Mutual Insurance Company filed the suit on Nov. 17 and is listed as the plaintiff. The defendants named in the suit are Furrow Flowers and Gifts, LLC and Jeffrey Scott VanMaanen.

Farmers Alliance Mutual Insurance Company is the authorized insurer for Sharon Triplet CPA, who operates a business at 115 E. Oklahoma, which sits next to the destroyed buildings.

The suit states the fire moved into and damaged Triplett CPA’s business and resulted in real and personal property, loss of business, an interruption of the business and loss of income.

The insurance company is seeking a judgement in excess of $75,000.

The suit claims VanMaanen conducted an act or omission that resulted in the start of a fire upon or about the rear entrance of the flower shop.

There have been no criminal charges filed in the case and the official cause of the fire remains as “undetermined.”

In the suit filed by Byron and Betty Berline, owners of both buildings that were destroyed, in Dec. 2019, claim VanMaanen was “observed multiple times coming out onto the back of the porch of the (flower shop) building and smoking cigarettes and then throwing his cigarette butts onto the ground.” Related article: Flower shop owner denies several allegations in Berline lawsuit

The Berline’s, again, claimed VanMaanen was again observed smoking on the back porch of the flower shop days before the fire broke out. At that time he had been specifically told to stop doing that because there was a danger he was going to start a fire, the lawsuit claims.

On the date of the fire, VanMaanen reportedly went to the back porch, smoked a cigarette, threw his lit cigarette butt down on or near cardboard materials, which resulted in the fire, according to the lawsuit.

Debra N. Corey, owner of the flower shop and a sibling to VanMaanen, denied all allegations in court filed documents.

In the Berline suit, Corey’s attorney states VanMaanen was not an employee of the flower business, was not under the control of Corey and says his client and her business is an improper party of the lawsuit.

Both lawsuits claim VanMaanen was an employee at the time of the blaze.

On Sept. 8, the Berline’s attorney, Tim Green, filed and was granted by a judge to a dismissal without prejudice against Corey as an individual.

The suit continues to find judgement against Furrow Flowers and Gifts, LLC and VanMaanen.