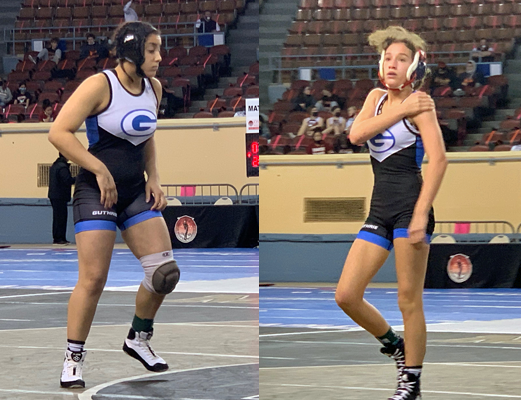 The Kirk sisters will wrestle for the State Wrestling Championship on Thursday evening. Khaleah Kirk is pictured left and younger sister Klaribel on the right.

It was not the finish that the Kirk sisters wanted at the State Wrestling Championships, but what a season it was for Klaribel and Khaleah.

Klaribel finished her freshmen campaign with a 14-5 record. She dropped her championship, by fall (1:51) match against Tahlequah’s Ashondra Valencia.

Older sister, Khaleah, dropped her final match 4-0 against Broken Arrow’s Allison Hynes. It was a rematch of last year’s championship match with Hynes collecting both victories.

Khaleah finished 18-1 on the season.

The Kirk sisters, Klaribel and Khaleah, will wrestle for state championships in the first ever girl’s state wrestling tournament on Thursday evening.

Klaribel, a freshmen in the 100 pound weight division, earned her way to the finals with a 6-4 quarterfinal over Sallisaw’s Emma Wissman-Travis and a pin in the semifinals over the top-seed from Altus, Beyonce Coronado.

In the semi’s, it did not look good early on for the younger Kirk as Klaribel trailed 7-0 going into the third and final period. However, with a two-point take down and three back points, Klaribel was back in the match trailing, 7-5.

Eventually, the points were not needed as Klaribel pinned Coronado 30 seconds later to make her way to the state finals.

Klariberl, who improves to 16-4 on the season, will square off with Tahlequah’s junior Ashondra Valencia (14-0), who is the top seeded wrestler from the east side of the state.

Khaleah has had a much easier path to the state finals with two pins and both coming in the first period in the 118 weight class.

The outstanding sophomore improves to 20-0 and goes for a perfect season with a championship match with Broken Arrow’s Allison Hynes. Hynes, the top-seeded wrestler from the east, enters with a 20-1 record.

A year ago in the same building, Hynes, a senior, defeated Khaleah in the 118 pound finals as Khaleah looks for redemption. The OSSAA did not officially recognize the girls champions.

In her first match on Thursday, Khaleah scored a 54 second pin over Tulsa Union’s Chanelle Alburg. In the semifinals, Khaleah needed 1:54 to pin Pawhuska’s Marion McCartney.

The medal matches will begin at 6:30 p.m. inside the Jim Norick Arena in Oklahoma City.

Be the first to comment on "Video: Kirk sisters take second at State Wrestling Championships"