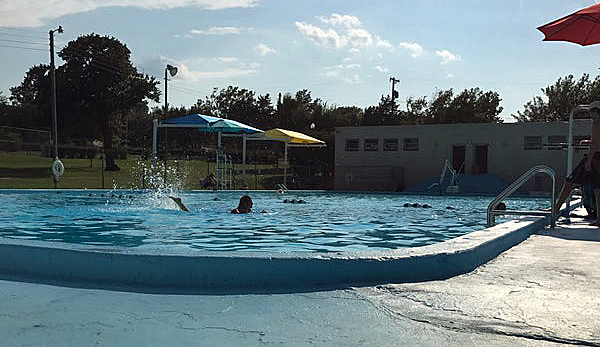 Guthrie’s Municipal Swimming Pool has been a staple for not only Highland Park, but generations of families who have spent their summer days pool side. However, the 90-plus year old structure is showing its age.

Stricter state restrictions, wear and tear and added expenses have taken its toll on the pool. To make it more complex, the unknown future of COVID-19 complicated the matter for city officials.

Earlier this week, the City of Guthrie, along with a recommendation from a state inspector, announced they would not open the pool for the 2020 swimming season. Related article: Highland Park pool to remain close for summer; City facilities to slowly open as allowed

Bethany and El Reno have also elected not to open their municipal pools.

City officials were unable to determine when the pool could open due to COVID-19. If the pool were to open, how much of the season would remain? Expenses also played a role in the decision.

It takes approximately three weeks to prepare for the opening of the pool with repairs, painting, filling up and testing.

Each year, City staff faces tougher restrictions when it comes to patching concrete, pumps, drains and with ongoing repairs in the pool’s Pump House.

Throughout the length of the pool, spalling continues to keep work staff busy before ever filling up the pool with water. Spalling is the flaking, chipping and large chunks missing from the concrete surface and exposing the coarse.

The City and YMCA have an operational agreement for the pool during the summer.

In past agreements, the City pays an operating fee of $5,000 — which is part of a $20,000 pool budget — to help operate the pool, while the YMCA operates the day-to-day of the pool, including management and lifeguards, and collects all revenue generated from pool activities to help offset operational expenses.

A year ago, over 150 youth (under 13) participated in swimming lessons, the pool was rented for 17 private events, nearly 300 participated in water aerobics and held a Summer Day Camp program with 85 children.

For public swimming, over 2,000 visits were counted for the three-plus months of operations, which calculates to an estimated 25 swimmers per day.

Future of the pool?

The swimming pool, which was constructed in the 1930’s, has been discussed throughout the years, including in 2016 when the city council ultimately voted down for adding improvements to the pool and a proposed water park feature as part of the Capital Improvement Project (sales tax). Related article: Council delays engineer work on municipal pool; budget shortfall comes to light

In 2019 during their annual city council retreat, council members requested a study for options regarding the pool, including the remaining life expectancy and replacing the pool. However, City staff has not addressed the study due to last year’s flooding event and COVID-19 concerns.

During the 2019 retreat, council members did not list the pool as a top 15 project opportunity or critical issue. The top projects, include a new wastewater treatment plant, Harrison Street bridge, a street overlay and bridge maintenance program and repair of the spillway at Guthrie Lake.

The estimated cost of a new municipal pool is estimated between three and four million dollars.

In August 2018, the City opened their first splash pad in Banner Park and is currently preparing to add a second pad in Mineral Wells Park. The cost of the future splash pad comes in at $324,543.80.