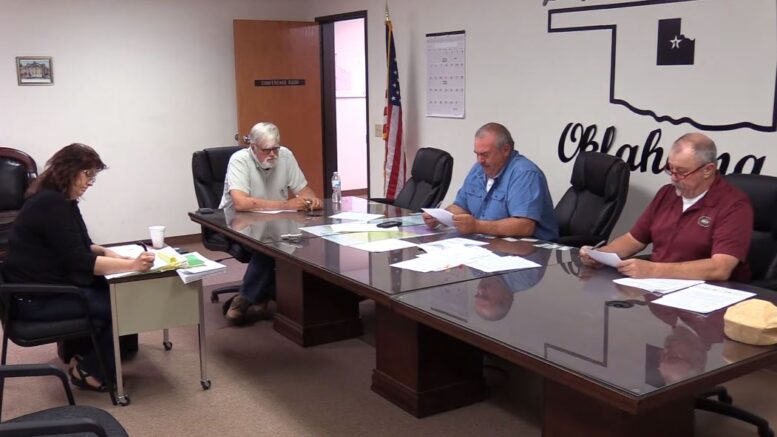 The top law enforcement officer in Logan County was nominated and approved to negotiate a proposed contract involving emergency management between the Board of County Commissioners (BOCC) and the City of Guthrie.

With a unanimous 3-0 vote from the BOCC Wednesday morning, Sheriff Damon Devereaux will work with City officials on the future of emergency management for the county and city.

Any negotiation approval would require a vote of the BOCC and Guthrie city council.

“I think Sheriff Devereaux is the best person to represent our county in that negotiation,” District 1 Commissioner Marven Goodman said of the former City police chief.

The civil defense contract between the two entities expired on June 30.

The previous contract called for the City to pay an annual $13,000 to the County for a mutual aid agreement. In addition, the City agreed to pay for telephone service, a cable drop for television service and maintain insurance coverage on items such as shelves, radios, antennas and equipment accessories.

In a new proposed contract, Goodman requested the City pay $60,000 annually, along with removing the City’s duties of supplying telephone and cable service.

“It may be a bit excessive,” Goodman said of the dollar amount but that it was a good starting point.

District 3 Commissioner Monty Piearcy added the contract “needs to be closer to 50-50.”

Goodman said the County can continue to help with assistance, but that it would take hiring another position to get the full use of emergency management and therefore needing additional revenue.

Goodman told his fellow commissioners he would like to see the County allow the emergency manager more time to focus on areas required by state statues.

“(Emergency Manager David Ball) really can’t devote all of his time, or majority of the time, helping the City of Guthrie. They (City) need the help, I’m not saying they don’t, but we really need to look at a different relationship as far as the contract goes,” Goodman said.

Devereaux agreed by saying, “We have one guy trying to take care of all the county. For us to try and put more stuff on David and still try to maintain the things he’s current doing, I think in some aspects we are setting him up for failure. If you truly want an emergency management program that works the way its supposed too, two would be optimal.”

District 2 Commissioner Mike Pearson added, “I do believe that we are needing two people. Guthrie needs to step up to the plate to start doing their fair share of supporting our emergency management for the entire county.”

No specifics were given on how much time was devoted to the City, or County.

All three commissioners appeared to be in an agreement of a possible scenario to allow both the County and City fund their own emergency management department.

“Sounds like to me that we don’t need to negotiate the contract at all,” Piearcy said. “Sounds like we just need to cut our ties. We’ll have ours, and they can get their own.”

A deadline for the negotiations was not announced, but the County’s fiscal year started July 1 and the City’s will begin on Oct. 1.

Be the first to comment on "Video: Sheriff to negotiate civil defense contract between BOCC and City of Guthrie"