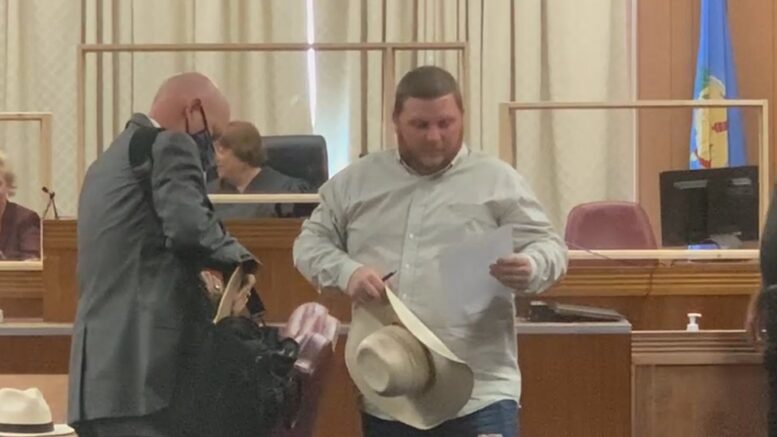 Zach Simmons speaks with his attorneys following the preliminary hearing on Aug. 20, 2020.

The man accused of leaving the scene of a deadly accident in 2019 will be bound over for a jury trial following a preliminary trial Thursday morning.

Zachary Simmons was back in court involving the death of 33-year-old Mandy Gorsuch that took place in downtown Guthrie on Oct. 26, 2019. Related article: Man charged for allegedly leaving fatality accident

Gorsuch was run over by Simmons’ truck across the street from Roosters Hard Time Club and died a short time later from blunt force trauma.

Following testimony, Logan County Special District Judge Susan Worthington ruled their was sufficient evidence that a crime had been committed and that Simmons will be bound over for trial.

From the witness stand, Tommie McClure testified he along with Mandy Gorsuch, Jenny Gorsuch and Josh Roder got a ride to Rooster’s that evening and later visited two other bars before returning back to Roosters. Admitting they were all intoxicated.

According to testimony, Mandy and Jenny were involved in a verbal altercation with Simmons and a female, who were in the truck attempting to leave the parking lot.

McClure and Roder, testified they walked towards the vehicle in an attempt to break up the altercation.

A witness, an innocent bystander, testified as he was walking to the club he saw someone in front of the truck and three others on the driver’s side yelling.

McClure and Roder said they saw Simmons flash what appeared to be some sort of a badge and stated “get back.” Soon after, Simmons, a former volunteer firefighter and jailer, pulled out of the parking lot and headed east.

The eyewitness said he heard tires squealing and then saw a person in front of the truck go under the truck when it made a right turn onto Oklahoma Ave.

Mandy Gorsuch was found on the ground as the truck continued on, but McClure, Roder and the eye witness testified Simmons got out of his truck a block away, inspected the vehicle by walking around, got back in and left the area.

McElwee said, “he knew he struck something.”

Simmons’ attorney, Scott Adams told the judge Simmons was simply trying to leave when he got accosted by three people.

“They chased him to his truck. They created this situation,” Adams said.

In 2019, Adams said, “He was not aware anyone was injured until later on when he was contacted by police.”

Related article: Simmons taken into custody; attorney says suspect was not aware of anyone being injured

Gorsuch’s family has pleaded for more severe charges, including murder two or vehicular manslaughter. However, the Logan County district attorney’s office said there is simply is not enough evidence for a more severe charge in the case.

A civil suit has been filed against Simmons, John Simmons, Rooster’s, and the Blowout Club LLC seeking punitive damages.

Simmons next court date is scheduled for Sept. 18 at 9 a.m.

Be the first to comment on "Video: Simmons bound over for trial; accused of leaving fatality scene"