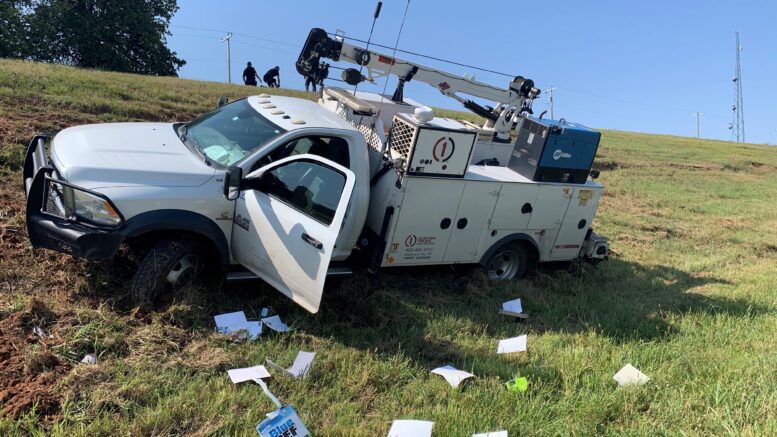 A suspect remains on the run after he stole a vehicle, led officers on a vehicle pursuit and then a manhunt.

A man called 911 on Thursday at 2:52 p.m. and reported his truck was stolen from Loves Truck Stop and that the vehicle went southbound on Interstate 35.

A Guthrie police officer was off duty preparing for a media interview in the same area when the call when out.

After getting onto the interstate, the officer found a vehicle matching the description of a white 2016 Dodge single cab near Seward Road. However, it was not the vehicle in question.

Within seconds, another 911 call came in from a motorist driving on I-35 stating a white truck was traveling southbound with the gas pump hose still in the vehicle.

The officer quickly got behind the Dodge and attempted to pull it over. Soon after, the truck stalled out on a hill between the rest area and Charter Oak Road.

The suspect, described as a white male wearing blue jeans and a hat, took off on foot toward the west into a thick wooded area.

Deputies with the Logan County Sheriff’s Office joined the Guthrie police officers in the manhunt with a perimeter surrounding Charter Oak Road between I-35 and Sooner Road.

Police tell Guthrie News Page the man can not be identified at this time. Detectives are working with the convenience store in hopes of identifying the person through surveillance video.

The driver of the stolen truck, with license tags from Missouri, says he was filling his truck with fuel when he walked around the truck. He says next the next thing he knew the truck was driving off.

If you have any information or see anyone suspicious, you’re encouraged to call 911.

Be the first to comment on "Video: Stolen vehicle leads to manhunt; suspect still on the run"