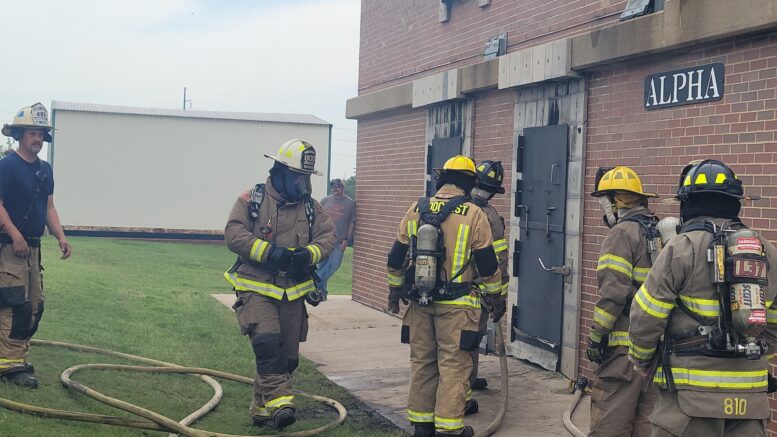 Although for a brief period of time, I got to see and feel what it’s like to be a firefighter. The short time for me was a reminder of how important volunteer fire departments and their firefighters are to Logan County.

Volunteer firefighters from Woodcrest, Sooner, Meridian, Cashion and Coyle recently held a training session at the Edmond Fire Training Center. State Representative Garry Mize and myself were invited as guests to go through parts of their ongoing training process.

Ideally, in a perfect world, it would be great to have three or four volunteer firefighters at a station waiting for someone’s emergency to come in, but it’s simply not often the case with day-to-day jobs and families. However, jobs and families are too many times pushed to the side for emergency calls.

For my training session, Woodcrest Fire Chief Luke Young took the morning off from his first wedding anniversary weekend. One firefighter had to leave early because of work responsibilities, while another firefighter had to escape home because he had put his wife’s mandatory chores off for too long.

One volunteer showed me their burns they had suffered at a training session. The burns were so severe that surgery was required, but a short time later the volunteer was back and responding to emergencies.

In most instances when a call comes in, a volunteer firefighter leaves their home or work and heads to the station to retrieve a fire engine, tanker or a rescue. Sometimes it might be only one or two volunteers that can get away to battle a fire. Luckily, all the fire departments work together when it comes to mutual aid assistance.

As a local reporter for 10 years, I’ve been on countless of fire calls from structures, to grass, to vehicles you name it. So going into this training, firefighters already had my utmost respect. However, following the training, that respect level moved up a few more notches.

I was checked out bunker gear (personal protective equipment used by firefighters) earlier in the week with trousers, a jacket, the nomex (material that protects the ears, neck and part of the face), a face shield, helmet, gloves and boots.

At the training event, my gear was laid out and ready to go, but before that Chief Young went over the guidelines in a classroom session. I’m not sure how many times he said the word “safety” but I got the point that it was the theme for the day.

After the classroom, I was ready to fight fire. I’ve seen it done hundreds of times. I know the lingo. I know the positioning. Let’s go!

CJ with the Cashion Fire Department was assigned to me for my safety. Everywhere I went, CJ was there.

As I geared up, I quickly realized there was a difference in wearing the gear in wearing a cozy room wearing it outside in the June heat. Although, it was not as bad as I had built up in my head.

Next, the SCBA (self-contained breathing apparatus) was secured on my back. Not extremely heavy, but you know it’s there.

Then came the face shield and this was the first time I became uncomfortable. With the warm temperatures and all this gear on, I could not control my breathing through the small hole where eventually the oxygen was put into place and turned on. After the oxygen tank was turned on, my breathing was somewhat better, but not at a comfortable level.

I asked that it be taken off so I could reevaluate and ease some of the anxiety. After some tips from CJ, I was able to control my breathing better. It was still not ideal for this rookie.

Now it was time to go into a (controlled) burning structure. I was assigned the nozzle, so I got to go in first followed by CJ, Garry and his safety firefighter. The nozzle guy, I believe, has it easier because he does not have to carry the weight of the hand line (fire hose) as the others do. We made our way to the seat (source) of the fire and it was amazing to feel the heat, but knowing my bunker gear was protecting me.

I began to pour water on the walls and ceiling to extinguish the fire. I was then instructed to put the water directly on the flames. This is when I felt the intense heat as the steam raised the temperature inside the burn structure even further.

The temperature reached 750 degrees inside, which is hot but more times than not it reaches well over 1,000 degrees in a burning structure.

Garry and I were routed out the safety door, while the other guys back tracked within the two-story structure.

My day as a firefighter was over. I took the bunker gear off and the air temperature felt like a meat locker as my body began to cool off.

Meanwhile, the volunteer firefighters still had a few more training hours to go and it was only getting hotter as the sun escaped from behind the clouds.

I asked one of the volunteers, “Why do you do this?” He said it’s a pride thing. “I can make a difference for someone and give back to my community.”

Volunteer firefighters, I say thank you for what you do for all of us here in Logan County.

If you would like information on becoming a volunteer firefighter simply reach out to any department and they can assist you with any of your questions.

Be the first to comment on "Volunteer Firefighters: A true passion for public safety"