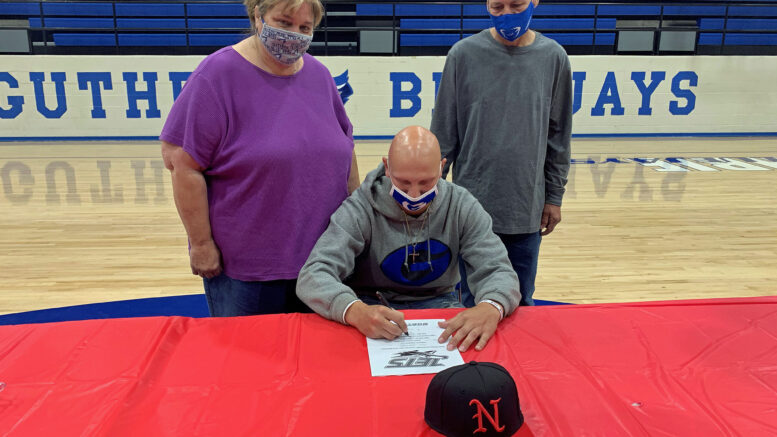 Just days before the Guthrie High School senior quarterback leads his team in a second round playoff game, Josh Rains confirmed his college future on the baseball diamond.

“We wish him noting but luck,” athletic director Jon Chappell said to the audience. “Josh is a perfect example of a Guthrie High School athlete. Hard-nosed, tough and a go getter.”

In 2019, NOC won the NJCAA Division II World Series at David Allen Memorial Ballpark, in Enid, for the school’s first ever championship in any sport.

“He fell in love with the campus. Fell in love the way Enid felt. It felt like home.”

Porter said NOC is a great fit for Rains and that his best baseball days are ahead of him.

“I think its a great decision for Josh. I told him many times his best baseball is going to come after high school if he puts a lot of effort into it. He’s quite possibly the most talented kid I’ve ever coached. The sky is the limit for Josh. We are all rooting for Josh to do his best at the next level.”

Rains told the gallery he was thankful for everyone who has helped him throughout his high school athletics.

“I want to give a big thanks to my mom. She’s my number one supporter through everything,” Rains said as he held back his emotions.

Guthrie head football coach Kelly Beeby gave everyone a chuckle after he was asked if he had anything to say about Rains.

“Josh, play really good on Friday night,” Beeby said as everyone laughed at the coach’s sense of humor. “Baseball does not start for awhile.”

Be the first to comment on "Watch: Josh Rains signs to play college baseball at NOC"