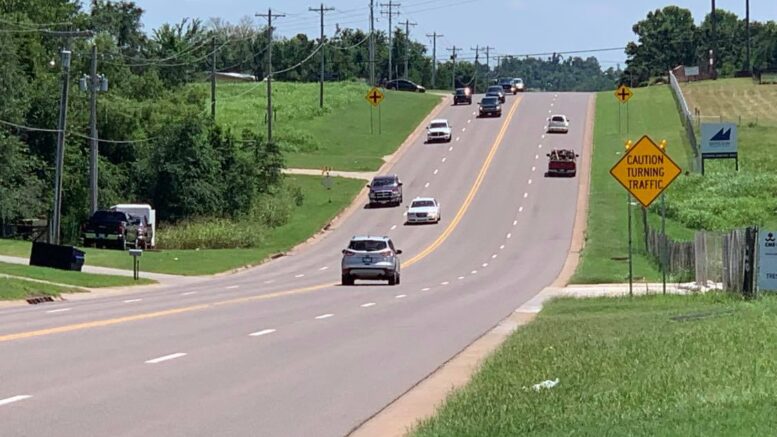 South Division Street is one of the two highest traffic roadways within the city limits and those traffic numbers will only be increasing with a new housing addition and a vocational center coming to the corridor.

City of Guthrie officials met with Oklahoma Department of Transportation (ODOT) and local state delegation in late spring on many roadway concerns, including the South Division (Highway 77) corridor between Airport Road and Prairie Grove Road.

The section of roadway is already one of the hot spots for traffic collisions with motorists turning into either the Mission Hills housing addition, the apartment complexes or Prairie Grove.

Fire Chief Eric Harlow spoke to the city council and said many of the accidents were due to motorists not paying attention behind the wheel.

“A lot of (the accidents) are due to inattentive driving and no left hand turn lanes for all businesses, houses and apartment complexes,” Harlow said. “They (crashes) are not always terrible, but any crash is not good.”

Nearly a decade ago, the speed limit was lowered from 55 mph to 45 mph, but city officials say the lower speeds have not alleviated the problem.

A plan to construct over 300 homes in a new phase of housing inside Mission Hills will soon add to the traffic issue. Also, Meridian Technology Center will open their new facility in January 2022.

Any road project in the area would belong to ODOT with the road being a state highway.

Harlow says signal lights at one or multiple locations have been discussed for years. Other possible solutions would be to lower the hill to improve sight distance, or adding a center turn lane throughout the corridor.

The latter two projects would cost upwards of a million dollars with dirt removal, requiring right-of-way and repaving.

“With that being a state highway, a lot of that would fall on ODOT for financial responsibility and currently it’s not on their radar for their 8-year construction plan.

Harlow says with more discussions, the City is hopeful the increasing traffic can soon be addressed and put on ODOT’s radar.

Be the first to comment on "City begins discussions with increasing traffic numbers on S. Division St."