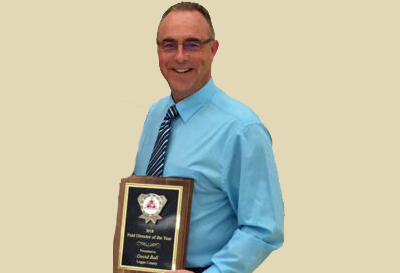 David Ball, who has served Logan County as the Emergency Manager since 2008, has formally resigned his post and has accepted a position with the Oklahoma Department of Emergency Management.

In an email to the Board of County Commissioners, Ball placed his notice of resignation effective for Feb. 26, 2021.

Ball is not only well-known and well-liked by county citizens, but firefighters and fire chiefs across the county, whom Ball assisted during house fires, grass fires, winter storms, flooding and other natural disasters.

“I won’t speak for the other fire departments in the county, however, I know many of my colleagues feel the same about the news of David’s resignation,” Young said. “I’m saddened and frustrated because many in Logan County have no idea how lucky we were to have David as our Emergency Manager.”

Young added Ball went above and beyond his duty as an emergency manager.

“I’ve seen and dealt with other EM’s across the state and David exceeded most by leaps and bounds. He did it with a pure heart of truly wanting to be there for the people of Logan County,” Young said.

In 2018, Ball was named Oklahoma’s Emergency Manager of the Year for his outstanding work to better the profession. Criteria to be considered included advanced training, community relations, program development, successful management of a disaster and contributions to the profession.

“What many don’t realize is David could’ve went to other jobs doing the same thing or similar capacity a long time ago and for more money, but he chose to stay,” Young said. “I’m grateful David has been blessed with a new job and all the fire departments in the county wish him well, but this is a tremendous loss to our county emergency services.”

“David Ball was a priceless and vital part of Logan County. If you had an issue or needed help he was always there to lend a hand or get you in touch with someone who could help.”

The Crescent fire chief continued, “We could always count of David to keep an eye out for the fire departments in Logan County and help us anyway he could. Whether it was providing information on a topic or helping on task force responses around the state. David will be greatly missed and has left some HUGE shoes to fill for the next Logan County EM. Wish him the best and know he only a phone call away if needed!”

The open position was also immediately published by the County as they seek applicants to fill the void.