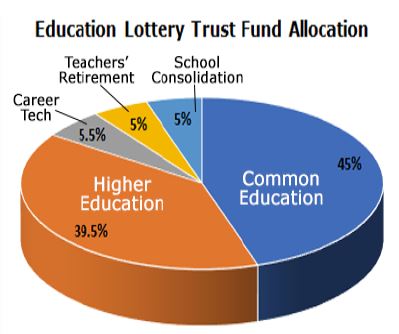 A question we hear a lot is “where is all the lottery money for education?” The short answer is that it’s deposited every month to help fund education. The graphic below has the breakdown of the Education Lottery Trust Fund allocation:

The Oklahoma Education Lottery marked its 16th year in operation by passing the billion-dollar mark with contributions totaling $1,039,861,645 since approved by 65 percent of voters in November 2004.

Oklahoma Lottery Commission Executive Director Jay Finks notes that’s a billion dollars in education funding over the years that probably would not have been available if not for the lottery.

“Our team has worked hard to help make a difference for education across the State,” Finks said. “Hitting the one-billion-dollar mark in education contributions was a historic moment for the Oklahoma Lottery; and we are not stopping State Auditor & Inspector Cindy Byrd April 2021 Education Lottery Hits Milestones in 2021 there. Fiscal year 2021 will see the Lottery achieve all-time highs in both sales and contributions to education.”

Original projections by lottery proponents projected a lottery could gross anywhere between $150 to $300 million annually in Oklahoma.

Actual annual revenues have been less than half the lower side of the estimate. Lottery officials point to lower prizes in the first 14 years and a mandated 35 cents of every dollar spent on lottery tickets directed to education as factors restricting the lottery education funding growth.

In 2017, the legislature removed the 35 percent of all sales funding requirement and replaced it with a net profit model with the opportunity for larger, more attractive payouts.

According to Finks, the change has doubled sales from about $150 million in FY17 to a projected $340 million in FY21. Looking at it in terms of profit, the contribution to education is on course to total $80 million this fiscal year as opposed to $50 million four years ago.

When that occurs, another milestone will be reached. The previous best year for education funding from the lottery was $71.6 million in 2008.

The Oklahoma Lottery Commission provides the State Equalization Board with a certified estimate of revenues each year. Finks says they keep it conservative based on previous year’s sales because the legislature does not make up revenue if the lottery underperforms its projections.

Under its current funding model, a minimum contribution is set per month to the Oklahoma Education Lottery Trust Fund. Each September, after its annual external financial statement audit, the Commission finalizes the total amount due to education in the previous fiscal year. Those additional dollars are deposited into the trust fund just as the new school year is underway.

You can see from the graphic of deposits (pictured below) to the education trust fund for the previous 12 months, a minimum of $3.7 million was deposited each month in FY21. September 2020 was the notable exception when, following the audit, the lottery deposited more than $18 million into the education trust fund to finalize its FY20 contribution.

Historically, annual funding from the lottery to each of Oklahoma’s 520 school districts amounts to around $59,000 per year or roughly the equivalent of one teacher per district.

In FY21, Common Education appropriations totaled $2.9 billion. Even if the lottery performed as was projected in 2003, it is still only part of the state’s education revenue streams.

Finks says, “We are excited for the future and plan on reaching the next billion dollars even faster than the first.”