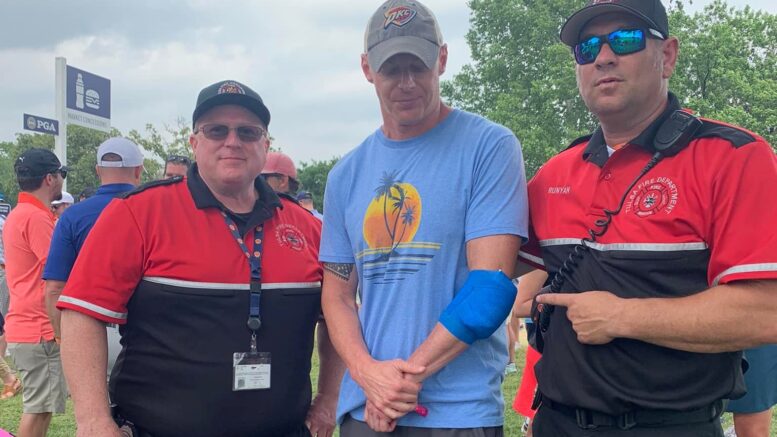 The 2022 PGA Championship held at Tulsa’s Southern Hills will be remembered for many years to come, especially for a Guthrie resident.

One of golf’s biggest draws are the major championships and Tiger Woods. Both were in Tulsa over the weekend. One of many in the gallery to take it all in was Jason Farley.

Farley and a large gathering collected along the fairway of the par four, hole one Friday afternoon to catch a glimpse of the 15-time major champion off the tee box.

Farley took a shot to his left elbow from the ill-advised Tiger shot.

“The sound it made was unbelievable! Straight impact on bone,” Travis Hurt said in a social media post who was standing next to Farley.

Guthrie alum Dawn Jarnagin was with Farley and said, “sounded like it hit a tree.”

While it may be considered a thrill or honor to be tagged by Tiger, Farley did feel the impact of a golf ball going over 150 mph.

“I’m either going to throw up or pass out,” Farley said moments after the impact.

As Tiger attempted to make his second shot, Farley had to kneel to help with the pain and to allow Tiger to take the shot, which was a towering cut that landed in the middle of the green.

Tiger did not acknowledge Farley, assuming he did not know about the black and blue elbow, before or after the shot. Although, members of the gallery were yelling towards Tiger that Farley had been struck.

Despite no Tiger acknowledgment, Farley did receive one of Tiger’s gloves from a member of his camp.

With Tiger moving on to the green, Farley snapped photos with members of the gallery who wanted a picture with the man hit by Tiger Woods.

Farley was treated by the Southern Hills medical staff and later discovered the elbow was not fractured.

Farley summed the event by saying, “crazy day for the memories.”

For the Tiger fans, his birdie putt from 50-feet nearly went it, but it was good enough for an easy par.