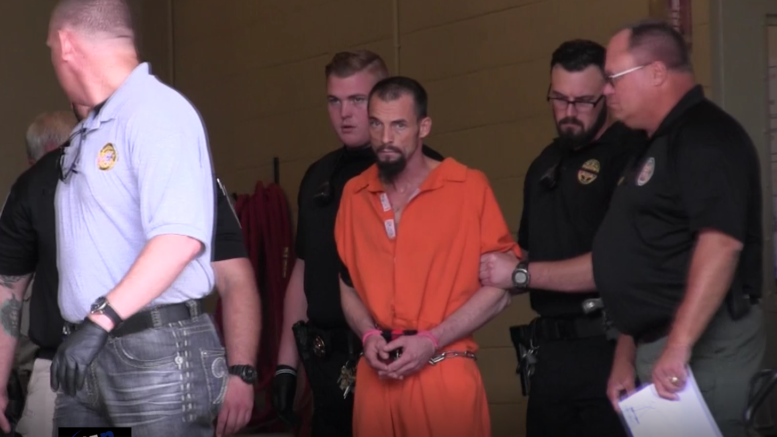 The Logan County District Attorney’s Office will seek the death penalty for Nathan LeForce, who is accused and charged in the shooting and killing of Deputy David Wade on April 18.

LeForce, 45, of Perry was in the courthouse Thursday morning for his second court appearance.

The district attorney’s office filed a bill of particulars, meaning their office will seek the death penalty.

The court document states, “The defendant (LeForce) by use of wanton and evil violence did walk towards Deputy David James Wade, engage him in conversation, and at close range did shoot Deputy Wade multiple times in the face, neck, and torso and continued to shoot him as he fell to the ground including shooting him in his back. The shots to the face and neck penetrated the body of Deputy Wade which resulted in a slow and agonizing death accompanied by extreme mental anguish, terror and suffering.”

The document goes on to say LeForce left the deputy on the ground to suffer, fled in the deputy’s truck, robbed a woman of her vehicle while pointing a gun at the victim and took efforts to cover up the crime by disposing of the weapon.

LeForce remains in the Payne County jail at the Logan County Sheriff’s request with bond being withheld.

Case moved up 45 minutes without notice

LeForce was scheduled for a 9 a.m. court appearance, but instead was moved to 8:15 a.m. unannounced to the media and family members of LeForce.

The move is believed to have been made for security issues.

Guthrie News Page was told LeForce was appointed a Capital Trial Division court appointed attorney. The attorney of record is Mitchell Solomon from Norman. His title, according to the Indigent Defense System, is listed as Chief Capital Counsel I.

LeForce is expected back in court on Aug. 7.