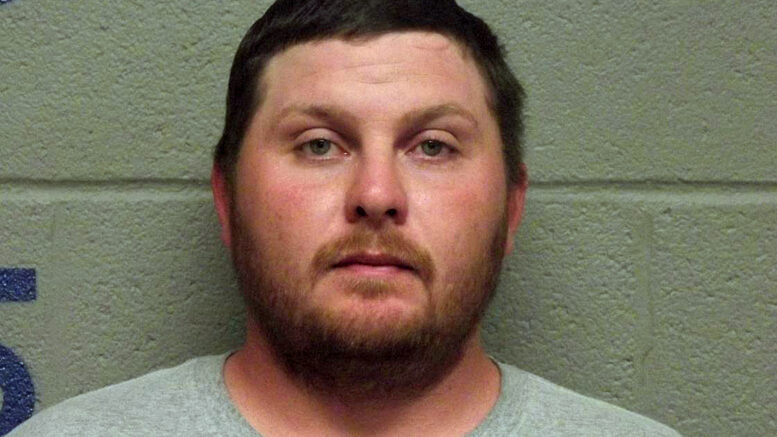 Updated on March 3, 2020 — Zachary Simmons appeared in court Tuesday afternoon without his attorney. The judge handed down a $50,000 bond. In addition, Simmons is not to operate a motor vehicle or consume any intoxicating substances.

Simmons was turned back to the jail to post bond.

He’s next scheduled to be in Payne County court on April 15. His next court appearance in Logan County will be March 31 for a preliminary hearing.

A man, who faces a charge of leaving the scene of a deadly accident in Guthrie last October, was arrested Monday morning of driving under the influence in Payne County.

Zachary James Simmons, 28, was charged in Logan County after 33-year-old Mandy Gorsuch was struck by a vehicle (allegedly driven by Simmons) on October 26, 2019 in downtown Guthrie. Simmons reportedly told investigators he had been drinking for several hours prior to the incident. Related article: Man charged for allegedly leaving fatality accident

Gorsuch died due to internal injuries while being transported to the hospital by Guthrie EMS.

Simmons was released on a $50,000 bond on November 1. Friends and family of Gorsuch have demanded and continue to seek more serious charges filed in the case. Related article: Simmons taken into custody; attorney says suspect was not aware of anyone being injured

In December, a civil suit was filed in Logan County on behalf of the Gorsuch family estate. Simmons, along with Blow Out Club LLC, Rooster’s Hard Times Club and John Simmons, were listed as defendants. The family is seeking the maximum $75,000 in damages from each party.

At approximately 2:28 Monday morning, a Payne County deputy observed a truck without a working tag light near Major Road and 44th Street in rural Payne County. After turning around in his patrol vehicle, the deputy located a case of beer and other beer cans on the side of the roadway.

With a traffic stop initiated by the deputy, the driver, Simmons, rolled his window down and stuck both arms out the window.

Simmons was questioned about the beer believed to have been thrown from the truck. According to the deputy, Simmons did not deny or confirm the beer was thrown out of the truck, but said it was not him that threw it out.

While being questioned, the deputy detected a strong odor of alcohol coming from Simmons. Simmons admitted he had been drinking, but that it was earlier in the evening, according to the deputy.

After being informed he was being placed into custody, Simmons began to back away and put his hand into his pocket, where the deputy noticed a clip for a knife.

The deputy drew his service pistol, while another deputy secured Simmons’ left hand. Both deputies were finally able to place Simmons into handcuffs where he continued to resist, according to a court document.

The knife, with the blade open, was found in Simmons’ left pocket.

Simmons, who has several traffic citations throughout the state, took a breathalyzer test with a result of .10, which is .02 above the legal limit.

Simmons was booked into jail on a misdemeanor charge of operating a motor vehicle while under the influence of intoxicating liquor and resisting arrest.

He posted a $2,500 bond. However, on Tuesday, the Payne County District Attorney’s Office requested to enhance the bond.

Assistant District Attorney Jose A. Villarreal says Simmons is a risk to the community.

“Defendant has shown he has no understanding of the dire circumstances he is currently facing and worse the danger he imposes on the community.”

He continued, “Defendant (Simmons) has used a motor vehicle to cause the death of Mandy Gorsuch in Logan County and is now driving under the influence in Payne County.”

The passenger in Simmons’ truck in the Logan County case was also with Simmons during his latest arrest on Monday.

“Defendant also is still riding around with the same people involved in both cases. Defendant is not grasping the dangers of his actions. Also, defendant face multiple charges in multiple counties raising the danger of being a flight risk,” Villarreal said.

Prosecutors have requested a $75,000 bond with added conditions of Simmons not allowed to drive a motor vehicle and no alcohol while out on bond.