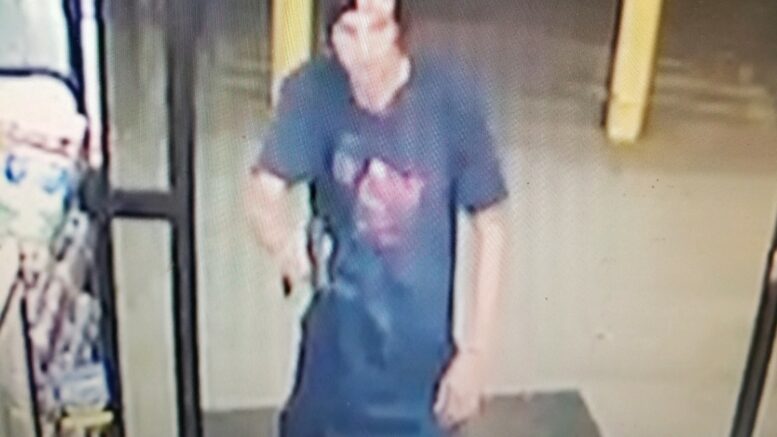 There were plenty of intense moments for several people Saturday night after a man robbed a dollar store at gun point and later led officers in a high speed pursuit in the wrong direction on Interstate 35.

The Logan County Sheriff’s Office (LCSO) was notified of an armed robbery of the Dollar General Store, located at Waterloo Road and Coltrane, just after 9 p.m.

A white male (pictured above) was seen walking into the store with a handgun. According to family members of the worker, the suspect took the victim’s white Grand Prix along with her purse and phone.

Minutes later, a LCSO deputy located the vehicle driving on Waterloo Road. The deputy pulled the vehicle over at OnCue, but suddenly took off. This time onto the off ramp of I-35 and begin travelling southbound in the northbound lanes.

With speeds reaching 110 mph in the wrong direction, the vehicle turn around at Covell Road and began travel north back into Logan County.

A trooper with the Oklahoma Highway Patrol took over the pursuit and performed a pit maneuver near Seward Road.

The suspect took off on foot while a woman inside the vehicle was taken into custody.

A manhunt then pursued for the next two hours near Community Church and the housing addition behind the church off of Sooner Road. However, deputies, troopers and officers with the Guthrie Police Department were unable to locate the suspect and remains outstanding.

Many local residents were on the highway during the pursuit and said they were nearly hit head on by the suspect when he was travelling in the wrong direction.

The female, who was taken into custody, was treated and released by Guthrie EMS at the scene after being involved in the pit maneuver.