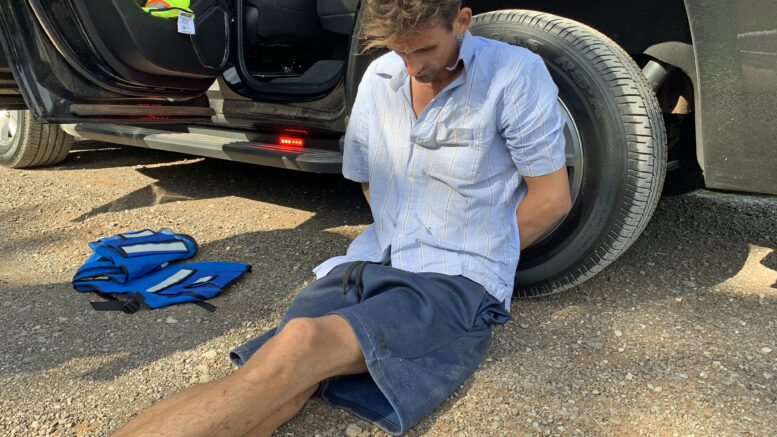 After a manhunt for an armed robbery suspect over the weekend, police now have Lawrence Lewis in custody after homeowners found him inside their garage.

A person inside the home – near Guthrie Lake – heard a noise inside their attached garage Monday morning just after 10 a.m. A man collected his revolver and went outside to the garage door. Inside he found Lewis hiding out.

With a gun drawn, the homeowner told Lewis not to move, which he obeyed the command until police arrived a short time later and took Lewis into custody.

Three people were inside the home, including a child. One person tells Guthrie News Page they were glad their home was protected by the Second Amendment and that Lewis did not attempt to fight or run once held at gunpoint.

Lewis had been on the run after stealing a vehicle on Saturday night. He was later spun out by a pit maneuver on Interstate 35 by a Oklahoma Highway Patrol trooper. Related article: Man robs dollar store at gun point, leads officers on pursuit

Investigators said the 30-year-old Lewis and 23-year old Alexis Nugent, who was arrested on Saturday night, began a crime spree in Northern Texas, including a pursuit, then stole a vehicle and made their way to Oklahoma.

Once the pair made their way to Ardmore they stole another vehicle and drove up to Deer Creek where they committed an armed robbery.

Next, they robbed a Dollar General near East Waterloo Road and North Coltrane Road.

Minutes after the Waterloo Road crime, a Logan County deputy located the stolen vehicle driving east on Waterloo. The deputy pulled the vehicle over at OnCue, but it suddenly sped off. This time onto the off ramp of I-35 and began travelling southbound in the northbound lanes.

With speeds reaching 110 mph in the wrong direction, the vehicle turned around at Covell Road and began travelling north back into Logan County before being spun out by the trooper near Seward Road.