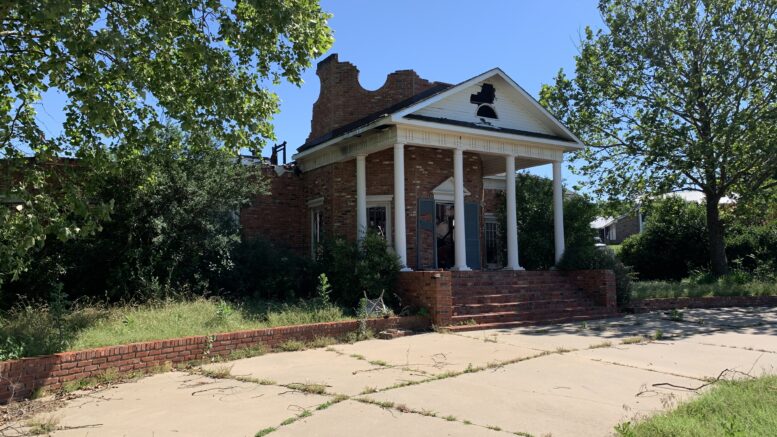 “OFB has paid Ms. Hestand all amounts that could be currently due under the insurance policy. Virtually all policy limits were paid long ago. Plaintiff’s main complaint is that she did not purchase enough insurance coverage to rebuild the house. OFB denies any breach of contract or any bad faith.”

It’s been nearly four years since a fire destroyed a home in Logan County. Now, neighbors say the abandon structure has become a dumping site, a home for stray animals and an eyesore. They simply want the property cleaned up.

The October 9, 2016 fire broke out at the home located at 117 Huntington, which sits across State Highway 105 from the Guthrie Golf and Country Club.

The homeowner lived in the home along with tenants. There were no injuries reported as fire crews spent several hours fighting the flames. Related article and video: Flames and smoke overtake house; four without a home

A year later in 2017, Penny Hestand, formerly known as Penny Howard, filed a civil suit against Oklahoma Farm Bureau Mutual Insurance Company in Logan County District Court. The action calls for a breach of contract and breach of the duty of good faith and fair dealing.

Two other issues brought on by the lawsuit called for negligent procurement and maintenance of insurance and constructive fraud and negligent misrepresentation. However, they were dismissed by a judge in March 2018.

There have been no court hearings on the case since March 2019.

Logan County, similar to other Oklahoma counties except Oklahoma and Tulsa, do not have planning or zoning offices to enforce such clean ups or removals.

One citizen says they have reached out to the homeowner as well as the Department of Environmental Quality in hopes of the property being cleared, but says they have not received a response.

Guthrie News Page reached out to Hestand’s attorney by email on Monday, requesting information on future plans for the property. So far they have not returned our message.

1 Comment on "Neighbors looking for answers in dilapidated home"