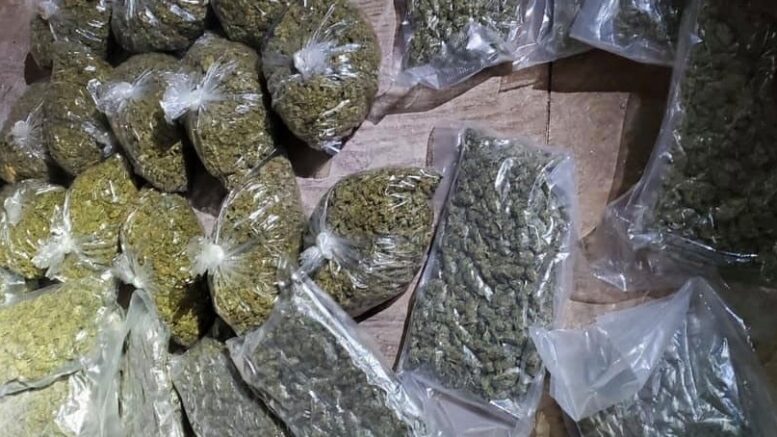 With some alert investigative work and search warrants, charges have been handed down from last week’s drug raid just outside of Guthrie. The investigation started several weeks before the raid took place.

“We are basically looking at this as a criminal organization that is simply using Oklahoma’s medical marijuana program to continue to operate their illegal operation under the guise of a medical marijuana farm,” Mark Woodward, spokesman for OBN said.

The investigation began in early March at a possible marijuana stash house, which led agents to two other homes in OKC.

While under surveillance of one home, individuals were seen loading boxes into a vehicle and then driven around the corner and loaded into another vehicle. That vehicle was stopped in Guthrie near I-35 with two occupants. The driver told officers he was headed to his home on Midwest Blvd.

Following a K9 search, inside a box of stuffed noodles was two vacuum sealed bags full of cash in a black plastic sack. Over $67,000 in cash, rubber banded together, was found in the bags. In which, over $61,000 was in $20 bills.

The rubber bands from the bundles of cash were tested and presumptively tested positive for marijuana.

Following the traffic stop, search warrants were issued for the OKC homes where in excess of $50,000 in cash was seized with matching rubber bands along with approximately 10 pounds of marijuana and cell phones.

In one of the cell phones seized, it was found that a suspect paid $100,000 for the sale of marijuana. Agents believe the source of the drugs, whether in full or part, came from the location on Midwest Blvd. just outside of Guthrie.

On April 1, a document search warrant was executed on the Midwest Blvd. property, a licensed medical marijuana manufacturer under the business name of Infinity Leaf Farms, which is owned by Andrea Sheung, according to court papers.

Agents said the search found several thousands of dollars of presumed illicit proceeds. Also found was a hidden room behind a book shelf that had a vacuum bag, rubber bands, passports, checks, a $170,000 wire transfer receipt and 100 pounds of flowered marijuana product sealed in 11 pound size bags found in the kitchen and living room areas.

On April 23, the search and seizure warrant was served and agents found 11,000 marijuana plants, including 1,100 of the plants in one suspect’s vehicle, 65 pounds of marijuana product, vacuum sealers and bags and over $1,000.

One of the suspects was not able to show agents any records required for the operation, including plant counts, sales and harvest product. The suspect later told agents he was going to deliver the plants found in the truck to a friend.

The OBN agent said Infinity Leaf Farms reported 3,000 immature plants to the Oklahoma Medical Marijuana Association (OMMA), which he says is “entirely inconsistent” with statements made to him.

10 people, all of Asian descent, were detained at the property during the search. Formal charges were filed on four individuals on Thursday, including unlawful cultivation of marijuana, trafficking illegal drugs (marijuana) and possession of controlled drug without tax stamp affixed. Each suspect has a $50,000 warrant for their arrest.

“It’s people like these criminal organizations who are under cutting them and selling on the black market that are hurting those who are trying to do it right,” said Woodward. “Our promise is to go after anybody who thinks Oklahoma’s laws do not apply to them.”