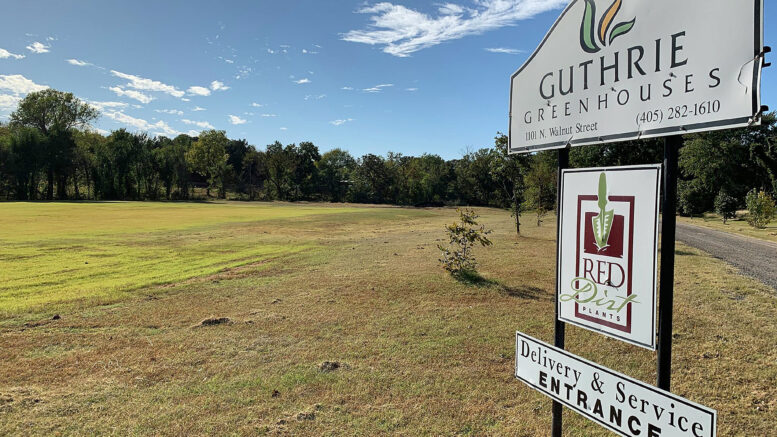 At last week’s Planning Commission meeting, seven neighbors voiced their opinions on why a local greenhouse company should not be allowed to rezone a portion of their property to agriculture around a neighborhood.

With a 2-1 vote to deny the rezoning, it will now be up to the Guthrie city council to ultimately decide if six acres of land should be rezoned to agriculture.

The land, currently zoned as residential two, is located at the intersection of Mockingbird Dr. and N. Walnut Street and owned by Guthrie Greenhouses.

Owners Jesse and Tara Tischauser are looking to add additional greenhouses on the east side of their property. The greenhouse business extends to the west to Highway 77. In addition, the company owns 40 acres north of Guthrie city limits.

The six million dollar a year business – established in 1882 – sells bedding plants and vegetables within a 500-mile radius to garden centers.

The citizens spoke against the rezoning, which would allow some livestock and crops to be grown, with the fear of additional commercial noise disturbances, increased semi-truck traffic and the possibility of marijuana being grown.

“I know the owner said they are not going to grow marijuana over there,” Andrea Bennett said to the three-member commission. “I don’t have a problem with marijuana, but I feel like it should not be done in the middle of a residential area. It shouldn’t be done where there are children walking to school down that street every day.”

Tara Tischauser said they do not plan on growing marijuana, but bedding plants and vegetables.

Ryan Codding says he wants Guthrie Greenhouses to be the best in the world but just in this neighborhood.

“I am all for the family having the greenhouses (being) profitable, bringing business and sales tax dollars into Guthrie. This (rezoning) is an all or nothing deal. If you tell them ‘we can rezone this to agricultural’ it automatically opens the doors to anything that is eligible to agriculture which does include greenhouses and growing marijuana,” Codding said.

Commissioner Joe Chappell made the motion to deny the application citing property values as his main concern.

“My concern is property values of the homes,” Chappell started out with. “I know if I was going to buy a home near there and knew this was going in it might change my mind. I think it can negatively impact property values. For that reason, I move to deny the application.”

Chairman Sharyl Padgett, a former city council member, said she was torn on the matter.

“I have mixed emotions. I understand the business side of it and I really like what they are trying to do. Industry is vital in keeping us (Guthrie) afloat as a city. That’s what we depend on.”

Afterwards, Padgett second the motion to deny the applicants.

Commissioner Kris Bryant voted for the rezoning says the two zones can work together.

“The City grew up around this property. I think mixed used neighborhoods that allow for a mix of business, residents and agricultural are healthy.”

The matter will go before the council on November 5.