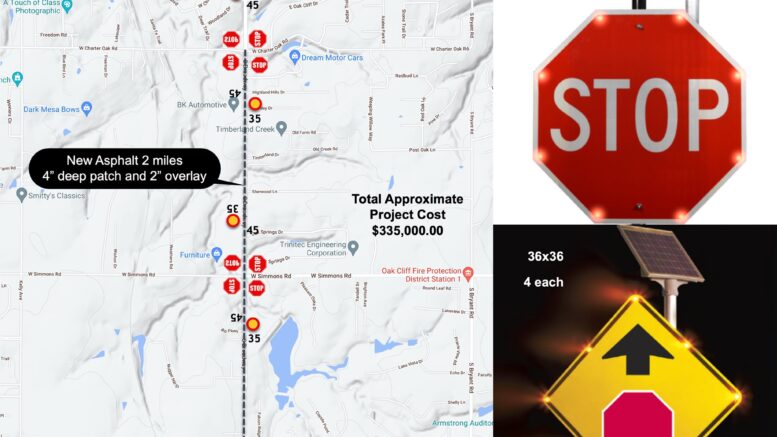 One of the most traveled roads in Logan County will soon see some major road updates.

District 1 Logan County Commissioner Marven Goodman has been focused on Broadway over the years, particularly the two-mile stretch of road from Waterloo to Charter Oak. The roadway is often traveled with commuters, school buses and school traffic.

The intersection of Broadway and Charter Oak ranks in the same danger class as the Broadway and State Highway 33 intersection. Despite adding solar power cross traffic stop signs, vehicle crashes have continued in the area.

Goodman, along with a safety committee that included Sheriff Damon Devereaux, considered multiple options to the intersection. One option considered was to add a traffic light signal. The project came in at an estimated $400,000 cost, which would not have included ongoing maintenance and monthly electricity cost.

With the addition of adding flashing signs, Goodman announced plans to make road repairs to Broadway between Waterloo and Charter Oak for a complete price ticket of an estimated $335,000.

“Our safety committee believes the four-way stop plan is a good value for our taxpayers and will greatly increase the safety of our commuters, while improving the driving surface of one of the most traveled roads in the fastest growing part of Logan County,” Goodman said.

Goodman added this project would not be available to the County without the assistance of Senator Chuck Hall, who was instrumental in passing state legislation this year that provided a yearly road funding increase to Counties which has not happened in nearly five decades.

The project is set to begin this month, but the general public will have a platform to comment on the proposal at the June 15 Board of County Commissioners. The meeting will be held in the Courthouse Annex beginning at 9 a.m.