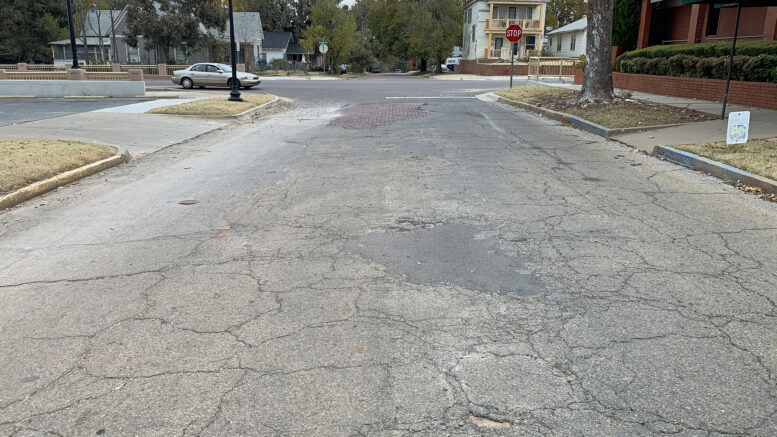 Pictured is 1st Street between Noble Ave. and Cleveland Ave. in downtown Guthrie.

There have been some interesting city council dialogues over the years, but Tuesday evening’s council session had more than its fair share in the discussion of approving bids for street repairs.

The City of Guthrie’s Street Committee discussed and approved several projects that were ultimately denied by the city council on July 2. The committee, after discussions with council members, provided an alternate plan. Those plans were approved by the council to go out for bids.

“The city council said okay you can get bids and we’ll fight it out when it comes back, Councilman Don Channel said. “This is the fighting out part.”

City Manager Leroy Alsup responded with a smile by saying, “Okay, I’m going to be quiet and let you all fight because you all enjoy that better more than I do.”

And so the 36 minute discussion began.

The council discussed the bids that included 14 projects and three alternate projects.

“I think that is the most asinine thing to pave that. That’s not even a through street and nobody uses it. It’s a street to nowhere,” Long said.

Mayor Steve Gentling began to ask Street Superintendent Tenny Maker about the issue of getting fire support in the area. However, Long interrupted by saying, “Oh hogwash. You can put a fire truck on that if you want to. That’s a scare tactic.”

Channel added, “We pull that ladder truck, policeman junk out every time we go talking about something. We’re all worried about that we are going to burn down or the boogers are going to carry us off. That’s the standard answer around here. We need to get off of that.”

Maker added that the road has drainage issues ending with standing water. He says his office receives calls from nearby residents about the standing water and mosquitoes.

Long responded, “Tell them (citizens) to take their shop broom and go sweep it out.”

Channel said it’s not about the money. “It’s about pouring it down a rat hole that don’t need it.”

Following a council meeting in September, 1st Street between Noble Ave. and Cleveland Ave. was added to the project list to go out for bids. The stretch of road, in front of Smith-Gallo Funeral Home, was damaged during the construction of the bridge. Despite efforts by the City to have the construction company address the road, the company denied causing any damage.

Long added the 1st Street project should be at the top of the list to repair.

“More people in this town drive that street than they drive that alley way behind the Junior High,” Long said.

Channel added, “I saw a dead guy raise up the other day when they hauled him over it. He was waving saying ‘let me out’.”

Long told the council that the alley between Division St. and Wentz. St (just north of BancFirst) needs to be addressed.

“My god, it will beat you to death. People use that alley.”

Maker informed the alley had been added to the street department’s list of improvements.

“There’s four stinking driveways down there. About four cars a day, maybe five or six. Okay, we want an apron. Lets pour out a dump truck load at the end of it and make that guy his apron and spend our money somewhere else.”

Maker says the entire Tara Lane project is estimated at $10,000 to repair the entire road. He says his crew has been to the location for base repairs after a trash truck fell through.

“It’s just a matter of time, it’s going to happen again. That’s why I am making it as a recommendation to do the entire stretch of the road,” Maker added.

Ultimately, the council voted 5-1 in favor of 13 street projects in the amount of $193,270. Channel casted the lone no vote.

All six present members voted yes to restructure 1st Street, including curb and guttering, for $29,948.

Each council member voted yes to surface the alley between N. Oak and N. Ash between Noble Ave. and Cleveland Ave. at a cost of $11,098. Homeowners in the area have pledged $4,500 to aid the project.

Be the first to comment on "Video: Council members show strong arguments on street repair bids"