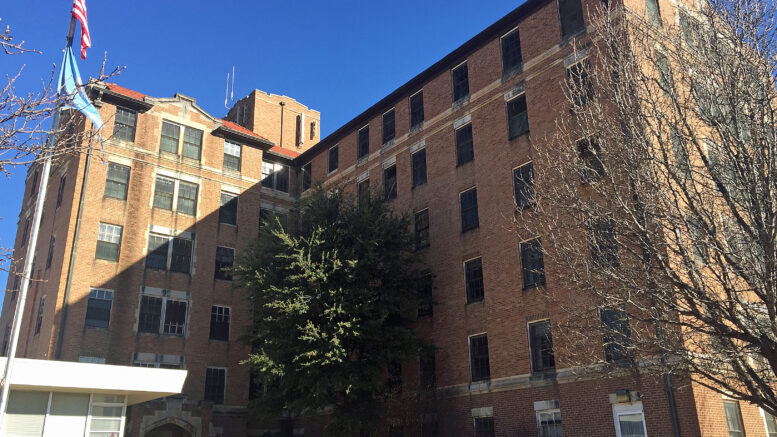 The Logan County Board of County Commissioners are hoping the information they heard Monday morning at their regular scheduled meeting is as true as it seems to be. If so, the first step in restoring a nearly 90-year-old building could begin as early as this spring.

The complete conversation can be viewed in the video below this article.

The Board of County Commissioners (BOCC) have sparingly held discussions over the last several years on what to do with the building often known as the “Six Story Building” which is located across the street from the Logan County Courthouse.

The former Masonic nursing home was constructed in the late 1920’s and was eventually donated to Logan County in the 1990’s. Despite the age, county officials have been told the building remains to be in good condition, structurally.

For many years, the building has set empty except to hold storage for the County.

The BOCC has shown interest in remodeling the building for adding county offices to help alleviate crowded space inside the courthouse.

While it is unknown how much it would cost to remodel or how it would be funded, the first step would be to remove asbestos, which is expected to be found throughout the building.

During citizens to be heard portion of the meeting, Aron Samwel, who is the Environmental Programs Manager (Brownfields Program) for the Department of Environmental Quality, says a program could handle the abatement at no cost to the County.

“We (Brownfields) help cities and counties assess their properties for environmental contamination (like) lead base paint and asbestos,” Samwel told the commissioners. “We can do all the abatement cost. Complete. At Brownfields we do the testing and then the Statewide Cleanup Assistance Program (SCAP) would do the abatement and wouldn’t cost you all (Logan County) anything.”

Semwel says a sampling would need to be done to get a cost estimate and then hand it over to SCAP to do the abatement.

Semwel said DEQ has secured a grant and are able “to pick projects” without a money match from the County. She informed the BOCC if an agreement is signed with SCAP and funds are no longer available they would be able to back out of the contract. However, Samwel says they have funds available for the project.

All three commissioners appeared hesitant, but excited about the proposal.

“It almost sounds too good to be true,” Piearcy said. “That scares me. I hate to be that way, but it’s just the way it’s always been.”

Semwel responded, “you can talk to other cities who have done it.”

The BOCC intends to look over the application and hold a special meeting to further discuss the item.

Semwel says the project could start as early spring if the application is moved on in the coming weeks.

Be the first to comment on "Video: DEQ says assistance is available for “Six Story Building”"