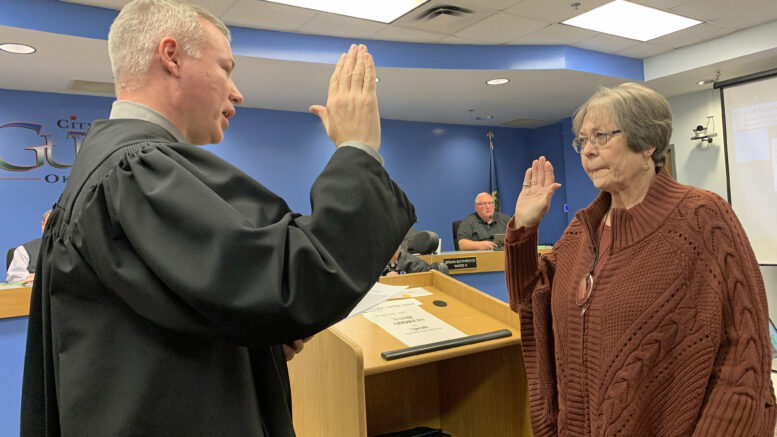 While the nomination committee and city council votes were not unanimous, the Guthrie city council welcomed back a council member to fill a vacant seat.

Council members Jeff Taylor, Steve Gentling, Jim Case and Brian Bothroyd cast the four yes votes, while James Long and Don Channel each voted no on the motion of approval.

She will serve the Ward III seat until May 2021 when the seat is up for election.

Padgett served on the city council after being appointed by the council in April 2013. In 2015, she won her election by nearly 63 percent.

In April 2019, Channel and Padgett campaigned for the Ward III seat with Channel edging Padgett out by six votes (164-158).

Gentling along with council members Taylor and Channel interviewed the four candidates for the open position. Related article: Four applicants apply to sit on city council; interviews set to begin

Gentling said he believed the nomination committee agreed Padgett had ace the interview process. However, it was not a unanimous decision to nominate Padgett. Gentling and Taylor both made the nomination. Related article: Election Results: Watch and discuss as the results come in

In July 2019, Channel was the lone council member to cast a no vote (6-1) to appoint Padgett to the City’s Planning Commission. Channel voted yes to add Padgett to the Guthrie Edmond Regional Airport board.

Along with Channel, Long voted no to appoint Padgett to the city council.

“My vote will not be in favor of Sharyl,” Long said as he read his email that he had sent to the mayor (Gentling).

“I have nothing against Sharyl. I think she is a wonderful lady, but I honestly feel nominating Sharyl is saying to the public ‘this is business as usual and we don’t care how you vote.’ The council is making history by not allowing new blood in and recycling the old.­­”

Padgett is now the third council member in the last 13 months to lose an election, but be voted back onto the council by the city council following a resignation. Thomas replaced Jason Smedley, Bothroyd replaced Chuck Burtcher and Padgett replacing Thomas.

Long continued, “This also makes the candidates who applied asked, ‘why did they even bother applying if we’re going to just put the same people back in office.’”

Long, who along with Channel began their first terms in May 2019, added he believes the citizens have lost trust in the council.

“The general public has lost trust in our council and doing this (appointing Padgett) just solidifies that we don’t care what they say that the council is going to do what the council wants to do. We wonder why our community isn’t growing and it’s because our leadership. We’ve continue to cycle through city managers and that’s because our city councils are harsh, toxic and unwilling to change. I refuse to be a part of the toxic culture and please know that I will continue to voice my concerns and my opinions.”

Gentling responded, “I’m sorry that you feel the council has created a different environment, James. I hope that you will work hard to fix that. I know I will and I’m sure that our colleagues on the council will too.”

Long finished by saying, “I want growth for Guthrie in ways of only bringing in new blood, new ideas and new expertise can do. Growth only happens when we get outside our comfort zone. I would challenge you to get outside of yours and promote new people.”

No other comments were made by council members.