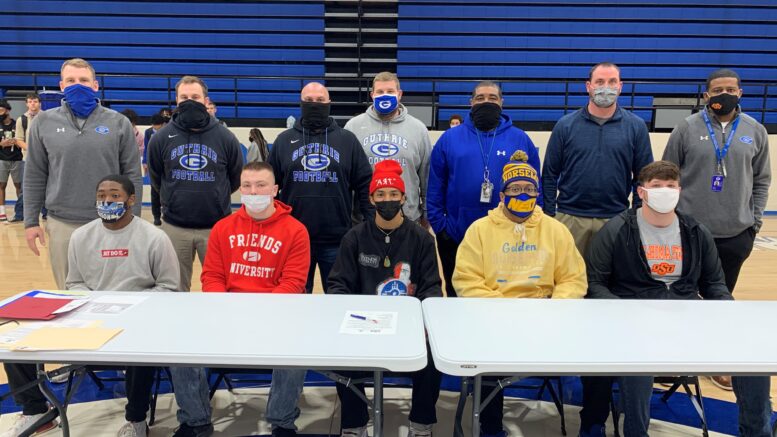 Guthrie Football had five players recognized at Guthrie High School on National Signing Day. The players signed their offer sheet to continue their athletic career on the college gridiron.

Head Coach Kelly Beeby introduced and spoke about each player inside the school’s gymnasium on Wednesday afternoon.

Ballard Stevenson’s accolades, includes being named the Ironman Player of the Year for District 5A-2 and All-Star by Class. Beeby credited Ballard Stevenson as a leader while serving as a team captain.

“He is one of the best leaders that has ever came through here,” Beeby said of his three-way senior leader. “He won every sprint, he out-worked everyone in the weight room and made his teammates better.”

Thompson was a two-year starter after moving to Guthrie just before his junior season and played primarily on the defensive side of the ball in his senior campaign.

Beeby said Thompson has the speed and strength up front to be very disruptive.

Thompson was named to the 1st Team Defensive Line for 5A-2 and an All-Star by Class.

Moore was a two year-starter on the Jays offensive line and finished with a career 73% blocking average.

He was named to the 1st Team Offensive Line for 5A-2 and an All-Star by Class.

Beeby said Moore had an advantage over defenders with his long and athletic build. The coach added he’s coachable and has a big upside.

Wiggins was a two-year starter for the Bluejays and was described by Beeby as a physical presence in the middle of the defense. He finished with 25 solo tackles, 48 assist tackles, four sacks, 9 tackles for loss, 14 quarterback hurries and of course the scoop and score as a sophomore.

Allison was a two-year starter as a wide receiver and half back. He finished with 24 catches, 354 yards and five touchdowns. Beeby added Allison’s skills blocking down field.

He was named to the 2nd Team in 5A-2 at the receiver position.

Be the first to comment on "Watch: Guthrie signs 5 to play college football"