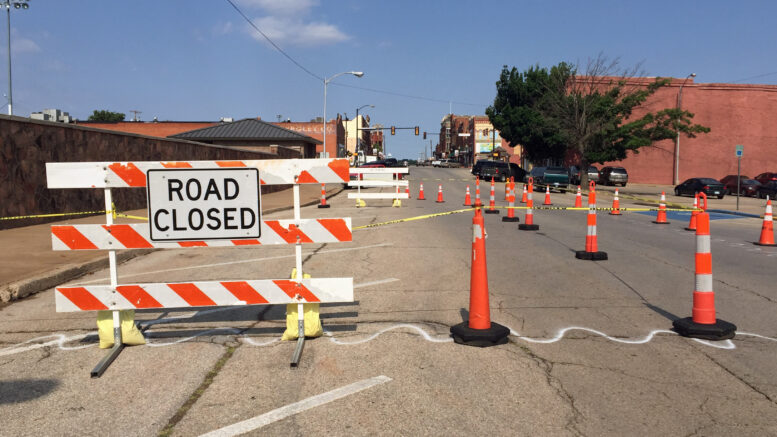 After several attempts to find funding on the state level to repair the Harrison Street bridge project, City leaders have agreed to fund the project through local funds.

The Guthrie City Council voted 7-0 Tuesday evening to solicit bids for the Harrison Street project located from Division to Broad and Wentz to Jelsma Stadium.

“It’s time to get it done,” City Manager Leroy Alsup said to the council members.

The discussion on the topic begins at the 28:15 mark of the video above.

The project will consist of removing the bridge and filling in the cavity. With the sandstone rock of Jelsma Stadium, a retaining wall will be required to protect the sandstone.

In June 2017, the City was forced to reduce the weight restriction on Harrison following a bridge inspection, which lays over the facility storage of Jelsma Stadium, that was built-in the 1930’s as part of the WPA project. Related article: Weight limit reduced for downtown road due to bridge inspection

Days later, the bridge was closed off to traffic forcing vehicles around the bridge area. Related article: Portion of downtown road closed down due to inadequate underground bridge

The City attempted to fund the project three times through the Association of Central Oklahoma Governments (ACOG) with grant applications, which were denied in October 2017 and February 2019.

This past August, ACOG awarded a grant of $126,273 for the nearly one million dollar project. Related article: Video: City Council agrees to try a third time for Harrison St. bridge grant

However, if the City had elected to use the ACOG funding the project would cost an additional $12,000 due to Oklahoma Department of Transportation’s stipulations. In addition, the estimated completion date would be in January 2023.

With the council’s approval, the project will now be funded completely through local funds with an estimated price tag of $798,948.32.

Alsup says the City currently has approximately $600,000 set aside for the project and will need to search to find the remaining balance.

Be the first to comment on "City to solicits bids to repair Harrison St. bridge project"