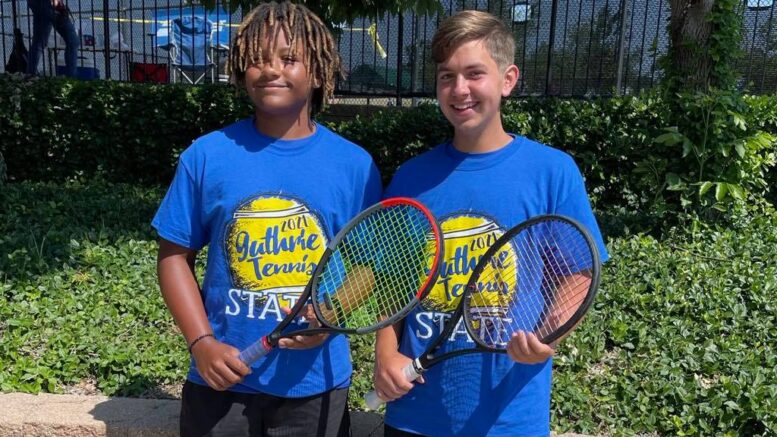 The Guthrie High School freshmen senior duo of Zale Coleman Hill and Ryan Taylor saved their best performance for the biggest tennis tournament of the season. The Bluejays finished seventh in No. 1 doubles action.

The duo took on a stout Class 5A bracket at the Oklahoma City Tennis Center, including eventual state champion Heritage Hall in the first round.

In an elimination match, Guthrie defeated the six seed Claremore 6-4, 6-3.

“It was the best match they played all year,” head coach Mary Hudson said. “Ryan’s serve was on fire and almost unreturnable point after point!”

In the next round, Guthrie dropped straight sets to Carl Albert (6-1, 7-6), but defeated Tahlequah in split sets (6-4, 5-7, 7-3). In earlier action, Tahlequah defeated the four seed Bishop McGuinness.

“They were really mentally tough over the last couple of days,” Hudson said. “I knew they were capable all year, but we lacked the mental toughness. They came up on that big time at state.”

The state tournament allowed Taylor to end his career on a high note, while Coleman Hill earned valuable experience as a freshmen to prepare for future tournaments.