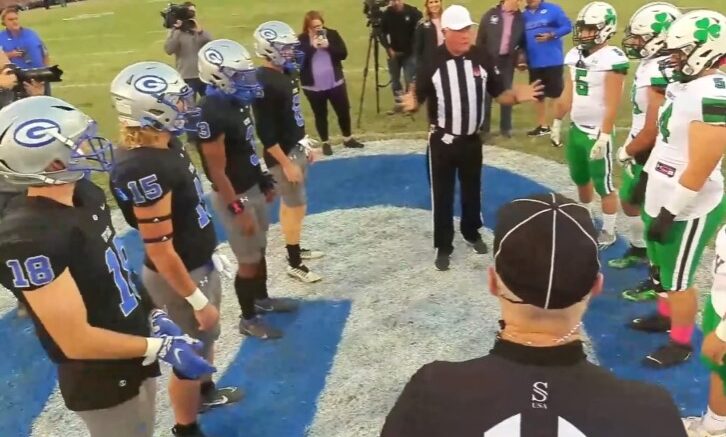 Guthrie, needing a touchdown, marched north and scored a touchdown to tie Bishop McGuinness. However, with 40 seconds remaining on the clock the Irish had just enough time to pull out the victory.

The Irish needing big plays in a hurry dropped back on first down and completed a 36-yard pass down to the Guthrie 30-yard line. The Irish receiver, Peter Bilicki, bobbled the ball three times before landing on the Jelsma Stadium turf along the Irish sideline. However, there was no immediate call for the officials on a catch or no catch.

After a brief discussion between officials, it was ruled a catch. With multiple replays and frame-by-frame, the play was extremely close, and arguments can be made for both sides of the ball although it appears Bilicki ultimately came down out-of-bounds.

Still, 26 seconds were left in the game.

Following an incompletion, a sack, and pass interference, the Irish had :03 left and lined up at the 25-yard line for a hail mary, but Guthrie called a timeout for one last defensive strategy. However, out of the timeout, the Irish brought the field goal unit on the field for a 43-yard attempt.

The kick was short, but Guthrie was flagged for roughing the kicker. The ball was spotted at the 13-yard line, and with no time left on the clock, the Irish drilled the 30-yard game-winner.

Guthrie (5-1) dropped their first game of the season, while McGuinness (6-0) stayed unbeaten.

Before the finale, the much-anticipated match-up lived up to the hype.

The Jays jumped out to a 6-0 lead on a 55-yard scoop and score by Xavier Williams on McGuinness’ second possession of the game.

McGuinness responded with a five-play drive – following a Guthrie special team fumble – on the ensuing kickoff, and one final first-half score early in the second quarter to go up 14-6.

The score would hold until halftime.

Each team scored on their opening drives in the second half, including a 14-yard run by Calvert to give the Jays their first and only lead, 20-14. But the Irish scored just two minutes later on a six-play drive to regain the lead 21-20.

Up next, Guthrie hosts Southeast for a Thursday night game inside Jelsma Stadium.