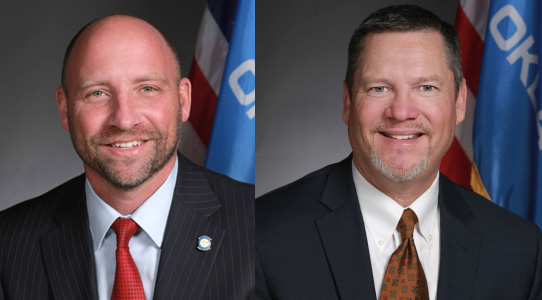 OKLAHOMA CITY – The Oklahoma Farmers Market and Farmers Hub Act was signed into law Wednesday by the governor.

Authored by Sen. Chuck Hall, R-Perry, and Rep. Garry Mize, R-Guthrie, Senate Bill 1785 creates the Oklahoma Farmers Market and Farmers Hub Act. The act sets standards for farmers markets and farmers hubs that are registered with the Dept. of Agriculture, Food and Forestry.

A hub differs from a market in that the food is sold on consignment for the producers, rather than direct sales that take place at a market.

Their constituent ran into an issue, however, when neither the Dept. of Agriculture nor the Health Dept. had a definition or rules for such an arrangement; as a result, the farmers market was forced to shut down for a few days.

“This is exactly the way state government should work,” Hall said. “Representative Mize and I were contacted by a constituent who had a problem that prevented their business from growing. We worked together to craft legislation to correct the issue and convinced our colleagues it was the right approach for Oklahoma’s business and citizens. I’m thankful to Governor Stitt for recognizing the value in our legislation and allowing it to become law by his signature.”

“With the creation of the Farmers Market and Farmers Hub Act, this model can now be recreated all over the state without fear of being shut down,” Mize said. “This will allow for more economic opportunities for Oklahomans. I was glad to work with Senator Hall to solve this issue raised by our constituent and I appreciate the Governor for acting quickly to sign this bill into law.”

The act specifies that registered farmers’ markets may sell unprocessed produce and nuts, meat, baked goods in compliance with the Home Bakery Act, processed foods meeting all governmental requirements, and nonfood items that comprise less than 25% of market sales.

Be the first to comment on "Hall, Mize legislation setting standards for Farmers Markets signed into law"