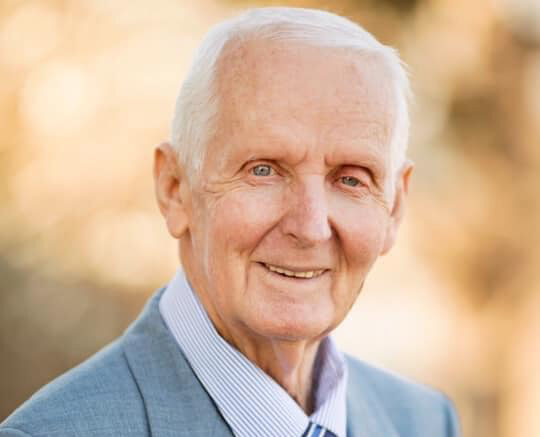 Coffin was born on a rural homestead in north Logan County on November 5th, 1932. Don spent his formative years on his parent’s farm cultivating the land and raising vegetables; a tradition passed down to his children. Coffin dabbled in numerous careers from schoolteacher to chef before settling into a position with a local Bancfirst. Although most would say he was an entrepreneur with a vision for the future.

“Dad could see the potential prosperity of Guthrie’s downtown district before anyone else,” recounts Anna Coffin, Coffin’s daughter. “He was a visionary, ahead of his time, and he had a way of making others excited about the possibilities. His passion was contagious.”

In 1982 the Guthrie Arts and Humanities Council was established to nurture the arts and enhance tourism for Guthrie, Oklahoma’s territorial and original state capital. Early endeavors included a concert series at Guthrie’s Scottish Rite Temple, bringing in artists such as Henry Mancini, Lena Horne, Victor Borge, and Luciano Pavarotti to local audiences. Coffin served as the board president and chaperoned the Pollard Theatre renovation project in 1984 alongside founding members Marilyn Branch and Margaret Hirzel. In 1987 the Pollard Theatre Company was established in partnership with Langston University, a collaboration which Coffin negotiated.

“He was the quintessential advocate of the arts,” says former Pollard Theatre Producing Artistic Director, W. Jerome Stevenson. “Don never tried to direct the artistic vision for the theatre; instead, he championed innovation and artistry, providing a stage for artists to create.”

Coffin recently celebrated his 89th birthday, and while family members have expressed his memory has become impaired, the Pollard Theatre remains a central thought of concern. Don Coffin had only two Christmas wishes this holiday season: help the Pollard Theatre more and increase giving.

“It warms our hearts beyond words to see Mr. Coffin’s love and dedication for this institution. When his family shared photos of his Christmas list, I was speechless. His continuous servitude is a testament to his passion for the Pollard,” says President of the Pollard Board, Suzanne Hirzel. “We are grateful for his devotion and thrilled to present him with our first-ever lifetime achievement award.”

Coffin will be honored on Sunday, December 19th, during a short pre-show ceremony at the Pollard Theatre before a matinee presentation of It’s a Wonderful Life: A Live Radio Play with a private reception following. Coffin’s friends and family will attend to help celebrate his legacy and achievement.

The Pollard Theatre Company is a historic resident theatre recognized by patrons, critics, and artists as one of the leading theatrical producers in central Oklahoma. Initially formed as a Resident Theatre Company in 1987, Pollard’s sense of ”company” now extends to a local pool of talented artists, creators, and collaborators. At its core, the theater is a communal, collective experience. Pollard is committed to finding ways to strengthen connections and community through live performance. The Pollard Theatre Company produces with additional support from the Oklahoma Arts Council, National Endowment for the Arts, The Shubert Foundation, Wanderfolk Spirits, and the Kirkpatrick Foundation. To learn more about the Pollard Theatre Company or purchase tickets, please visit www.thepollard.org.

Be the first to comment on "Visionary, Donald Coffin to be Pollard Theatre’s first-ever Lifetime Achievement Award, Recipient"